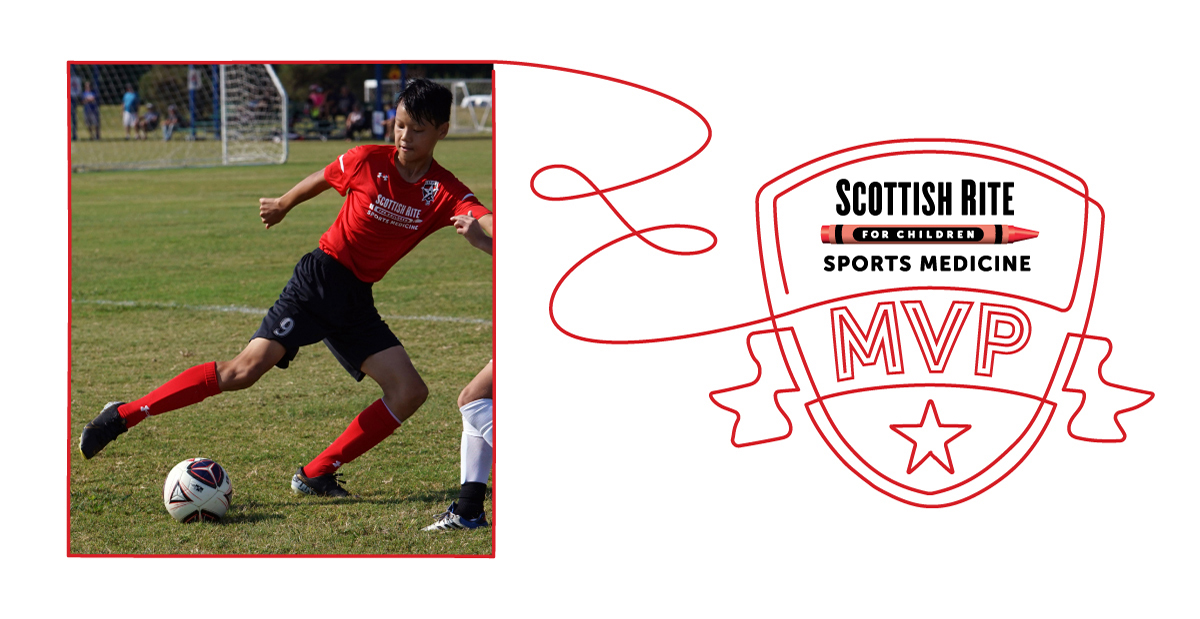 A Soccer Injury Won’t Slow This MVP Down for Long

During a soccer game this spring, 14-year-old “Coppell FC” midfielder, Thomas, blocked a shot and fell to the ground. His father, Michael, didn’t think too much of it. Thomas often puts his body on the line to make shots and blocks, and most of the time, he quickly bounces up and continues to play. “When he didn’t get up, I realized that something was different,” says Michael. “We hit the ball on opposite sides at the exact same time, so that twisted my knee, and I heard a pop,” says Thomas recalling the play. Michael ran to Thomas on the field and could see that his knee was already swelling.

The family had taken their children to the Scottish Rite for Children Orthopedic and Sports Medicine Center in Frisco for other injuries in the past, so Michael knew who to call. Thomas was examined by sports medicine physician Shane M. Miller, M.D. The X-ray and MRI confirmed that the “pop”, immediate pain and swelling were caused by the tearing of the medial patellofemoral ligament (MPFL) when his kneecap temporarily dislocated. This ligament helps to prevent the kneecap from slipping to the outside of the knee.

While going over nonoperative and operative treatment options, Miller informed them that without surgery, there was a 50% to 80% chance that his kneecap would dislocate again while participating in sports. They decided to meet with pediatric orthopedic surgeon Philip L. Wilson, M.D., who reassured them that surgery was the best option for long-term recovery and healing. A couple of weeks later, Wilson and certified pediatric nurse practitioner Chuck W. Wyatt, R.N., M.S., CPNP, RNFA, performed an MPFL reconstruction. “Dr. Wilson and his team did a great job!” says Michael. Thomas was happy too and says, “Dr. Wilson was very nice, and so were all the people who helped me, like Dr. Kelly who helped with my IV and pain medication.”

Ten days after surgery, Thomas started twice a week physical therapy at Scottish Rite with physical therapists, Madelyn “Maddie” White, P.T., D.P.T., and Rushi Patel, P.T., D.P.T. He and his father are very pleased with the progress. “Physical therapy has been great!” says Thomas. “Maddie and Rushi are both great. Right now, therapy includes mostly basic exercises, but I can now bend my knee past 90 degrees. I started at like 70 degrees, which is pretty bad, so it’s improving.” Maddie agrees, Thomas is improving. She says, “After most surgeries, the first stage of rehabilitation is to protect and regain motion in the joint. Soon, Thomas will progress to exercises and activities that will improve strength and control in his legs and trunk.” 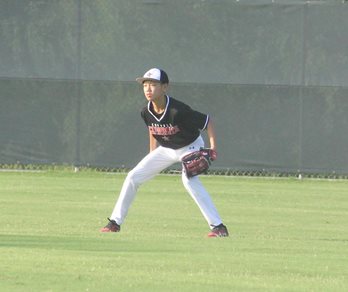 was for Little Leaguer’s shoulder, which helped him to commit quickly and fully trust in the postoperative rehabilitation plan. Thomas will miss this year’s baseball season and playing in one of his favorite events, Middle School Matchup (MSM) Summer Smash. As a Scottish Rite patient and alumni of the MSM, Thomas was invited to throw out the opening pitch for the 2021 tournament. It’s no surprise that Thomas loves this event. The fun-focused tournament brings together unlikely baseball and softball teams formed through middle school affiliations, reminiscent of sandlot play where skill isn’t a deciding factor.

Thomas is very focused on what he can do instead of what he can’t. Thomas is looking forward to trying out for the soccer team his freshman year at Coppell High School. “I’m doing a lot better,” says Thomas. “I’m walking without crutches, and hopefully, the brace will be off my leg soon.” He is already thinking ahead about exercises that he can do once the brace comes off to strengthen the muscles around his knee to help reduce the chances of reinjury. As he heals and progresses in rehabilitation stages, his physical therapists will introduce exercises that include more functional and soccer-specific movements. When he completes his formal physical therapy, Thomas will be a good candidate for our bridge program, designed to progress the patient back to sports safe 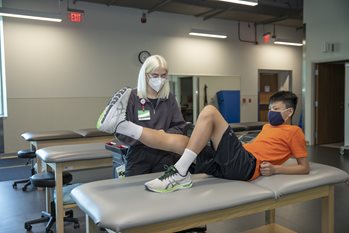 Thomas encourages young athletes to stick with physical therapy and to do what their trainers say. “They know what is best,” he says. “You want to be back on the field as soon as possible, and if that means taking things slow now, it’s worth it in the long run.” Michael wants parents of young athletes to know that it is hard when your child is taken out of the sport that they love because of an injury. It hurts to see your child in pain, but he says it is important to have a positive attitude and to work closely with your medical team. “Their advice is the best we can get, so open communication with your medical team is going to help your child make progress,” says Michael. “With Scottish Rite’s help, Thomas is getting better every day. Not just physically, but emotionally and mentally too.”