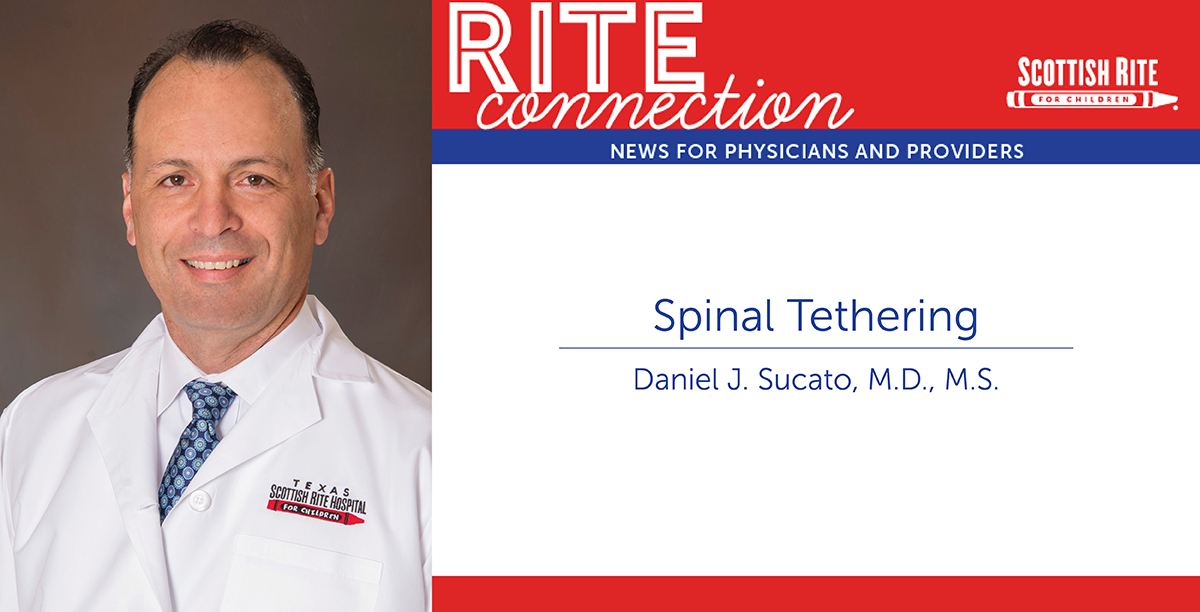 In August 2019, the Federal Drug Administration (FDA) approved a new technique to treat patients with adolescent idiopathic scoliosis (AIS) known as the vertebral body tether (VBT) or “tethering” for short. The technique is mainly  for children who are still growing and whose curves are approaching or are in the range for traditional surgical treatment. It was first studied in animal models and more recently in a variety of clinical series. This short review will discuss scoliosis in general, the traditional treatments for this condition, the rationale for tethering, the early results and some perspective on its utility in patients today.

What is Adolescent Idiopathic Scoliosis?
Scoliosis comes in a variety of forms with the most common being adolescent idiopathic scoliosis (AIS), defined by scoliosis in normal patients between 10 and 18 years of age without an underlying syndrome or congenital abnormalities of the vertebrae or ribs. The “idiopathic” aspect of the title refers to the fact that we do not understand the underlying etiology for the occurrence of the scoliosis. Despite an incomplete understanding of the cause of AIS, we do recognize that curve progression occurs when children have growth of the spine (especially rapid growth) or when the curve measures greater than 50 degrees at the completion of growth. Based on these well-accepted facts, the traditional treatments for scoliosis are threefold: observation, bracing and surgery.

Traditional Treatment
We observe small curves (<20 degrees) in children who are still growing or larger curves (up to 50 degrees) in those children who are done growing. Bracing is reserved for growing children with curves between 20 and 45 degrees with the goal of preventing curve progression during their growing years and to avoid surgical treatment. Braces come in two main categories, the all-day/nighttime brace (used for all curve types) and the only nighttime brace (predominantly used for lumbar or thoracolumbar curves between 20 and 35 degrees).

Traditional surgery is indicated for curves greater than 50 degrees or for curves which will inevitably be greater than 50 degrees (i.e. a 45 degrees curve in a 10 year old who is in the middle of their growth spurt and is a Risser 0). Posterior spine implants are used to obtain correction of the spine and then to hold the spine in that position until the spine fuses. Today, surgery is exceptionally successful with very few complications or revision surgeries, and patients are often back to their full activities including athletics and sports three to six months after surgery.

What is Tethering?
The concept of growth modulation is applied in the lower extremities when a surgical procedure is used to partially limit the growth of the physis (growth plate) to improve a deformity. This has had great success for children primarily because we know the exact growth of the distal femur (1 cm/year) and the proximal tibia (0.6 cm/year). We can “tether” the medial or lateral growth plate to allow the other side of that same growth plate to improve the deformity and, when correction has been achieved, the small implants can be removed. Depending on many factors, correction occurs within six months up to a few years.

How is Tethering Used in the Spine?
This same concept has been applied to the spine in which the tether is placed on the convex aspect of the spinal curvature to slow the growth of this side of the spine, which, in theory, allows the concave aspect to continue to grow. This “internal brace” has the theoretical advantage of correcting the curve while allowing the patient to be very active, without the need to use a brace, and therefore maintains some flexibility of the spine. The tether is placed in the front of the spine using a thoracoscopic approach with four small incisions, in which a single screw is placed in each vertebral body which is then attached to a flexible tether made of polyethylene polymer. The tether is tensioned at the time of surgery to gain some correction of the curve and the patient is followed after that to monitor the spine with respect to curve correction and evidence of complications. This technique is best applied to patients who have thoracic curves (the most common curve pattern in AIS) but can also be applied to lumbar curves although this is not as well accepted and is controversial.

What are the Risks?
The theoretical advantages of the technique must be weighed against the challenges that have been seen with the follow-up of these patients and can be categorized into two main areas. Understanding the exact indications for the procedure to avoid under correction or overcorrection and avoid breakage of the tether. The indication for the tether is as an alternative for bracing.

Under Correction and Overcorrection
However, if a tether is placed in a small curve of 25 degrees in a growing child then overcorrection occurs. This happens with a reversal of the curve so that the convexity switches from the right to the left and requires reoperation for tether removal and potential treatment of this left-sided curve.

Breakage
The other risk is that the flexible tether has a relatively high chance of breaking due to the flexibility that remains in the spine. When this occurs, a revision surgery may be required because correction is no longer possible over that segment(s).

How Does Tethering Compare to Alternative Treatments?
In this population of growing children, bracing is a highly successful treatment (>70%) without the risks of surgery. The success is of course related to the quality of the custom-made braces and requires monitoring of compliance of the brace. At Scottish Rite for Children, we use a temperature sensor in the brace  and there is now a phone app to monitor in real-time. Also, a definitive fusion procedure leads to outstanding outcomes with a very low rate of reoperation.

In summary, tethering of the spine has promise as an alternative to bracing to maintain partial spine flexibility, provide an opportunity for curve correction and potentially avoid a fusion procedure. It is important to provide a clear description of the results and complications with each patient and family prior to deciding if this technique is right for them.

Learn more about scoliosis and our research in the Center for Excellence in Spine.