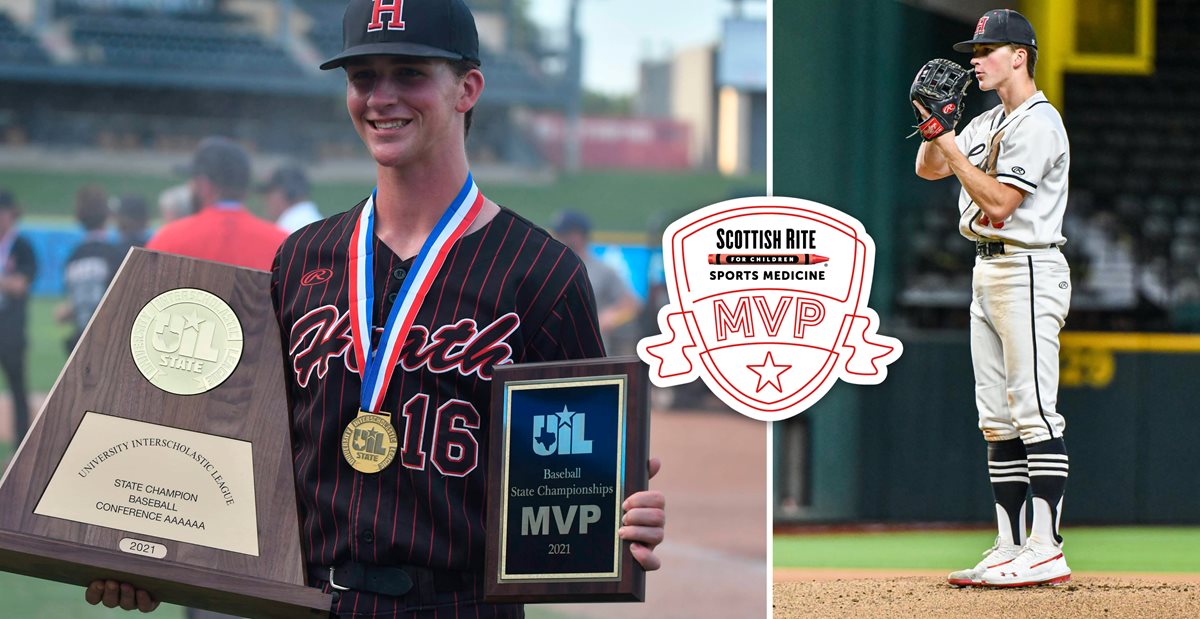 The Work Takes Time, But It Makes You Great

18-year-old Caden has always loved baseball. He has been playing since he was 4 years old, and he’s received numerous awards through the years. When he was just 12, he was awarded Perfect Game’s Super25 MVP pitcher. As a teenager, he was included in Perfect Game’s All-Tournament Selection, Pre-Season All-American and All-Region teams. Caden plays second base mainly, but he has seen time at shortstop and center field. He is also a phenomenal, right-handed pitcher.

In 2018, Caden began to have pain in his right elbow, so he visited pediatric orthopedic surgeon Philip L. Wilson, M.D., at the Scottish Rite for Children Orthopedic and Sports Medicine Center in Frisco. “I knew they had an excellent orthopedic program, and I was aware that Dr. Wilson had worked with many high-level athletes,” says Alan, Caden’s dad. “He is very well respected in elbows and shoulders.”

Wilson explained that Caden’s elbow pain and inflammation was caused by repeated stretching of the ulnar collateral ligament (UCL), a tight band of tissue on the middle side of the elbow, from throwing. There are two important components to treatment. First, the ligament needs time to heal, so rest from throwing and pitching is crucial. Then, properly timed rehabilitation focused on strength and flexibility of the shoulder and trunk helps the young athlete return to their pre-injury status. After his prescribed rest, he slowly returned to throwing with a strategic 8-week interval throwing program which gradually increases the quantity and distance of throws. The program also encouraged Caden to focus on proper form with every throw to reduce the risk of reinjury. “I was extremely pleased with Dr. Wilson’s entire staff,” says Caden.

Caden utilized additional resources in his recovery to further improve his flexibility and strength and to further reduce his risk of reinjury. Near his home in Rockwall, Caden completed formal physical therapy and a strength and conditioning program with practitioners knowledgeable in the shoulder and pitching programs. These 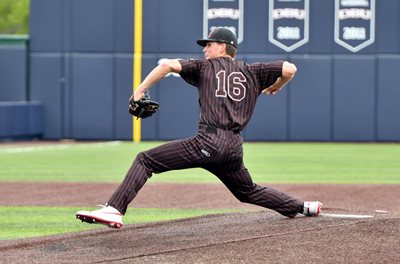 programs helped build Caden’s strength, not only in his arm but in his core and back as well. “It’s not just one muscle – it’s a combination,” says Alan. “It’s getting everything working and firing together so he can handle the stress of pitching.” Physical therapy was humbling at first for Caden. “I saw charts with the average strength levels of collegiate and professional athletes compared to my strength level in high school and saw how long I had to go,” he says.

After six months of physical therapy, Caden was on the field with his teammates at Rockwall-Heath High School performing at the highest level. He was named 1st Team All-District for infield this season, and on June 12, he and his teammates won the UIL 6A High School State Championship. Caden was also named MVP of the game. Caden graduated high school this year and has received a scholarship to play baseball at Northern Oklahoma College in Tonkawa, OK.

Alan advises both young athletes and parents to pay attention to any inflammation and soreness that the child is feeling. “Always err on the side of caution and rest when you are dealing with pain,” he says. “If it’s not better after about a week, I recommend scheduling a consultation with Scottish Rite.” Wilson advises any athlete with activity-related pain to have an assessment by an athletic trainer or sports medicine specialist.

"Caden is a prime example of an athlete properly responding to pain. He rested, he rehabbed and he’s back at a very high level. If he had continued to throw, he might have ended up tearing the UCL and requiring a longer period out of baseball and possibly surgery. So many are concerned about missing a season, but he’s right – taking recovery seriously pays off in the end." – Philip L. Wilson, M.D.

Caden hopes his story can help other young athletes understand the recovery process so they won’t get frustrated when it seems like it is taking too long. “The steady work grind takes time, but it’s what makes you great too,” he says. “I think with shoulder care, it’s important to understand that stretching is not just a warm-up but truly a part of your overall pitching program.”