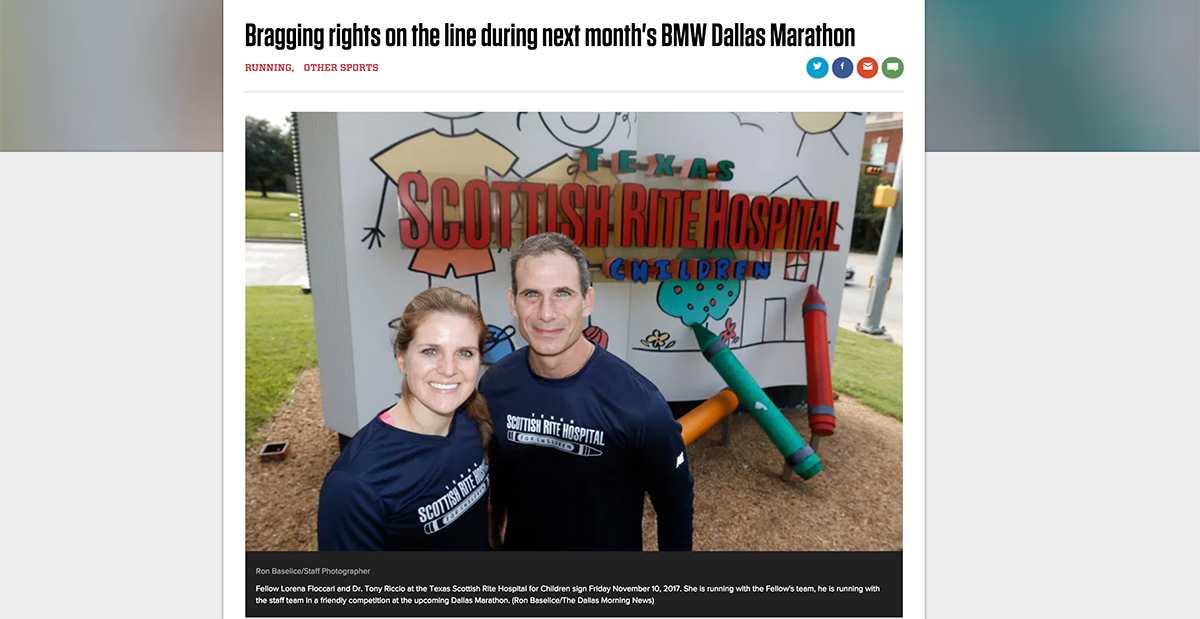 Lorena Floccari hopes she and her four Texas Scottish Rite Hospital for Children co-Fellows can halt a 13-year losing streak against the hospital's orthopedic staff in a deep-rooted competition involving next month's BMW Dallas Marathon.

This marks the 20th year that the staff and its Dorothy and Bryan Edwards Fellowship in Pediatric Orthopedics and Scoliosis recipients have fielded five-person relay teams. The Cox School of Business Relays are held in conjunction with the Dec. 10 marathon and half marathon.

"It's grown to be an expectation," said the hospital's chief of staff, Dr. Dan Sucato, one of the staff relay members. "The camaraderie it engenders is really strong. It allows people to come together under the guise of competition. It's all about generating enthusiasm and support for the hospital, the community and the marathon."

The hospital, the primary race beneficiary, has received $4 million from the marathon since the partnership began in 1997.

Each August, the hospital welcomes its five Fellows to work alongside its attending staff and to participate in extracurricular activities. Floccari remembers learning about the marathon relay while interviewing as a fourth-year resident at the Mayo Clinic. She said opportunities to bond with the staff and the other Fellows through such events helped persuade her to accept the Dallas fellowship.

"There's more of a community feel here than any other program," she said following a training run at the hospital. "It sets you up well for everything to come when you have these relationships with your mentors."

The Fellows have beaten the staff only once, back in 2002. That year, one of the Fellows was a former Navy SEAL. He rallied the group, which consisted of numerous other athletes including an ultramarathoner, a former NCAA Division I soccer player, a colege baseball player and a woman who was an Olympic hammer throw participant, recalled Dr. Tony Riccio, the staff team captain.

There were a few years the Fellows should have won, according to lore, such as the year the staff used a ringer or in 2005, when one of the Fellows needed a ride to the relay exchange location. The staff member responsible was late, and the Fellows lost a big lead.

The 2017-18 Fellows, who range in age from about 28 to 32, are all athletes. Dustin Greenhill, an All-American gymnast at West Point, started running while serving in the Army. Jeff Peck, a four-sport high school athlete who played intramurals at Northwestern, has run the 12-person, 200-mile Hood to Coast relay multiple times. Surya Mundluruplayed NCAA Division I tennis at the University of Missouri-Kansas City. Ian "Corky" Corcoran-Schwartz played baseball and rugby at Johns Hopkins.

And then there's Floccari, a former pitcher for the Saint Louis University softball team, who has completed several half marathons.

Most of the staff's team members, who range in age from about 40 to 68, were former Fellows, and they have run the relay many times, said Dr. Riccio, a staff orthopedic surgeon and avid cross fitter. Dr. Sucato participated as a staff member the first year of the competition.

Others include Dr. Philip Wilson, assistant chief of staff and director of the Center for Excellence in Sports Medicine, who competes in cutting horse events; Dr. John Birch, assistant chief of staff smeritus, an avid soccer player and long-distance runner; and Dr. Henry Ellis, a staff orthopedic surgeon and competitive skier, who has worked as a physician for the U.S. Olympic Ski Team.

Floccari said she and her co-Fellows have become more focused as race day approaches.

"We weren't taking it as seriously until we found out the history and that the staff wins every year," she said. "We've been ramping up our training. We've been doing some strategizing."