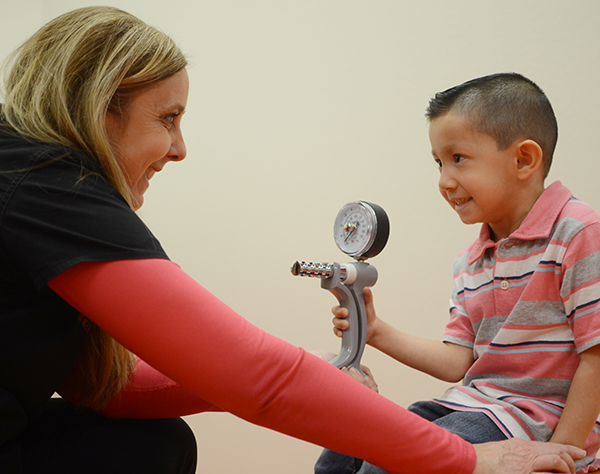 Scottish Rite for Children was the first pediatric orthopedic facility in the United States to employ full-time hand surgeons. Our Center for Excellence in Hand provides specialized care for children with hand and upper limb anomalies, as well as children who need complex reconstruction following trauma.

The hand center staff is dedicated to the well-being of the child, both physically and emotionally. Our goal is to help each child obtain maximum function, happiness and independence. Our approach is individualized to each child, as no two children are exactly the same.

We are fortunate to have vast experience in the treatment of many conditions that allow us to deliver the best care to each child. The hand surgeons at Scottish Rite for Children are also actively involved in research and education, and train doctors from around the world in the treatment of a wide range of hand disorders.

Arthrogryposis, also known as limited movement or stiff joints, is a condition that includes multiple joint contractures and lack of muscle development. The most commonly affected joints are in the child’s hands, wrists, elbows, shoulders, hips, knees and feet.

The cause of arthrogryposis cannot be identified in most cases. When joints are not moved for a period of time before birth, extra connective tissue develops, and it can result in joint contractures. In this case, the joint is fixed in a stiff or locked position and the tendons connecting the joint do not stretch to their normal length, making joint movement difficult.

Physical and occupational therapy, as well as bracing and exercising, may help improve flexibility, position of the child’s joints and use of the upper arms. Surgery may be necessary to release joint contractures that do not respond to therapy.

The goal of both operative and nonoperative treatment is to help children gain independence in daily activities.
Cleft hand classically presents as a V-shaped appearance of the hand; however, wide variations in presentation exist. It can affect the hands as well as the feet.

Frequently, a genetic cause can be identified related to a chromosomal mutation.

Treatment is individualized to the patient, as many times function is near-normal despite the appearance of the hand, and surgery may actually prove detrimental. In other instances, closure of the cleft provides improved appearance as well as improvement in overall function and is recommended. The exact nature of the cleft-closure procedure depends on the underlying finger/thumb positioning and anatomy.
Polydactyly, also known as extra fingers, is one of the most common hand conditions present at birth. The condition can appear as any form of an extra digit, anywhere from a small, raised area to a complete digit. The affected digit may also appear “split.”

In some cases, polydactyly is genetic, but it can also accompany other hand conditions, such as syndactyly (webbed fingers).

Treatment for little finger polydactyly (post-axial) varies depending on the type of extra digit that is present. A minor procedure in the clinic may correct small extra digits or those with a narrow base. However, when the base of the extra digit is broad, or if the extra digit is rooted deeply in the hand, reconstructive surgery may be the best option to create the most functional hand possible for the child.

If surgery is required, your child will wear a protective cast until the area heals. After the cast is removed, many children return for follow-up visits to monitor hand growth and function.

Children with extra thumbs (radial polydactyly) usually require a formal reconstructive procedure after the age of one.
Hypoplastic thumbs, also known as small thumbs, can vary from very little size difference to a completely absent thumb. Structures involved can include bones, joints, tendons, ligaments and/or combinations of all of these.

The presence of a hypoplastic thumb is usually part of the radial longitudinal deficiency (radial dysplasia) spectrum. This condition may or may not be genetic in nature, and may also involve other organ systems. As a result, a complete workup is necessary, specifically looking at the cardiac, renal and blood systems.

Treatment can range from no surgery to index finger pollicization. At times, the thumb present is used as a thumb but is deficient in ligaments and tendons, and in this case a tendon transfer/ligament reconstruction procedure is warranted. Index pollicization procedures usually are performed between the ages of 1½ and 2 years, with the tendon transfer/ligament reconstruction procedure being performed at an older age (4-5 years old) because of the need for larger bony structures and compliance with therapy.
Madelung Deformity
Madelung deformity is the name given to the appearance of the wrist caused by an abnormal curving growth of the radius, one of the bones of the forearm. The forearm appears short, and the end of the ulna bone becomes prominent.

Madelung deformity is more common in girls than boys, and the condition often runs in families.

Treatment depends on the patient’s age and severity of the deformity. Surgery will either prevent it from getting worse or correct the deformity by repositioning the bone and holding it with pins. After surgery, a cast will hold the elbow, forearm and wrist in the corrected position for four to six weeks. A shorter cast will be used after that until the bone is fully healed.
The pollicization procedure creates a thumb out of a child’s functioning index finger. Through this procedure, children who are missing a thumb or have a small thumb that does not function can gain greater precision in pinch and greater ability to grasp larger objects. Through the pollicization procedure, the index finger is moved down on the hand into the thumb position and rotated into opposition to the other fingers.

Although the thumb is only one against the four fingers, it is functionally half of the hand. For a child with no other disabilities, the pollicized index finger can function as quickly and accurately as a thumb on a child born with all five digits.
Radial polydactyly, also known as abnormal thumbs, is a condition in which more than one thumb is present on a hand. There are many appearances and varieties of thumb “duplications,” varying from a broad fingernail to a complete double thumb. Polydactyly can involve bone, joint, muscle, tendon, nerve, blood vessels and/or skin. Usually it occurs on one hand only, and neither thumb is completely formed.

Thumb polydactyly can occur in many forms, most commonly occurring because of an abnormal segmentation of the thumb leading to the appearance of two thumbs. However, each thumb itself is smaller than the unaffected thumb on the other hand.

Treatment options vary based on the anatomy of each thumb, but generally involve reconstructive surgery of the bone, ligaments and tendons. Sometimes, parts of the two thumbs may be combined to build the best possible thumb for the child.

The best time for treatment is when the child is old enough to safely undergo an elective procedure and when the thumb is large enough for the doctor to perform a more technical procedure with precision. A protective cast will be worn after the surgery until the thumb is healed.
Symbrachydactyly, also known as missing fingers, is a condition that occurs when an arm or hand does not completely develop. It is a very common condition for a child to have one hand smaller than the other. They may also be missing joints, fingers or sometimes an entire hand. Children with symbrachydactyly are generally healthy and are not more likely to have other associated health problems than the average child.

The exact cause of symbrachydactyly is unknown, and it does not seem to run in families. It is thought that there is insufficient developing tissue for all of the parts of a full arm and hand to form.

Short or missing fingers occur in many forms, most commonly because the fingers did not develop completely during the second month of pregnancy. The condition is usually present on one side only, with a possibility of muscle abnormalities on that side as well.

Your doctor will discuss with you the best treatment options for you or your child. While there is no way to restore the hand completely, treatment options are available. The goal of treatment is to allow the child to be as independent and confident as possible in using his or her hand in daily activities.
Syndactyly, also known as webbed fingers, is a common condition in which a child’s fingers or toes do not fully separate during development, causing “webbed” spaces. The spaces between two or more fingers or toes may be webbed. Sometimes it is only the skin that is joined, but in other cases the fingers can also share tendons, nerves, blood vessels and bone.

Some forms of mild syndactyly may not need treatment. If a reconstructive operation is necessary, your surgeon will carefully reconstruct a new space between the bases of the fingers. A small piece of skin from another area of the body, called a skin graft, will be needed to help cover the space between the fingers after they are separated.

Timing of surgery is variable, commonly being performed around the age of 2, when growth of the hand has slowed. Surgery may be recommended earlier if the webbing goes out to the tips of the fingers and is affecting growth. About 50 percent of children who have a reconstructive operation will need a “touch-up” operation in their teen years when the hand reaches its full size.

After surgery, the child will wear a protective cast to allow the hand to rest and heal. It is important to keep the cast clean, dry and cool. Follow-up visits will be scheduled to monitor the healing and function of the child’s hand.
Thumb in palm, also known as contracted thumb, presents as a thumb that rests in the palm and does not actively extend out of the plane of the hand. It may affect one thumb or both thumbs.

There are many possible causes for a contracted thumb in an infant/child, and a careful examination is warranted to determine the underlying cause. At times, it can be simply an imbalance between the tendons that extend and flex the thumb, while at other times it can be a result of a more central disorder.

Treatment is dependent on the underlying cause and can range from observation, stretching and splinting to more elaborate reconstructive procedures.
Scottish Rite for Children treats children who need complex reconstruction following trauma or have hand disorders related to neurological conditions or nerve injuries.
Trigger thumb occurs when a bump exists on the tendon that moves the joint at the tip of the thumb, causing the thumb to jump or “trigger” when it’s used. In other cases, the thumb might be locked in a bent position.

The tendon that moves the joint at the tip of the thumb is like a strong cord that connects the muscle to the bone. Inside the thumb, the tendon glides inside a tunnel, called the tendon sheath.

For normal movement of the thumb joint, the tendon must slide up and down inside the tendon sheath. If the tendon becomes too thick, it can no longer glide through the sheath normally, and the thumb can trigger or lock.

Initial treatment for trigger thumb depends on the clinical presentation. At times, observation alone is indicated. Surgery for trigger thumb, called a trigger thumb release, enlarges the tendon sheath and allows the thumb to move more normally. After the procedure, the child will wear a cast for one to two weeks. 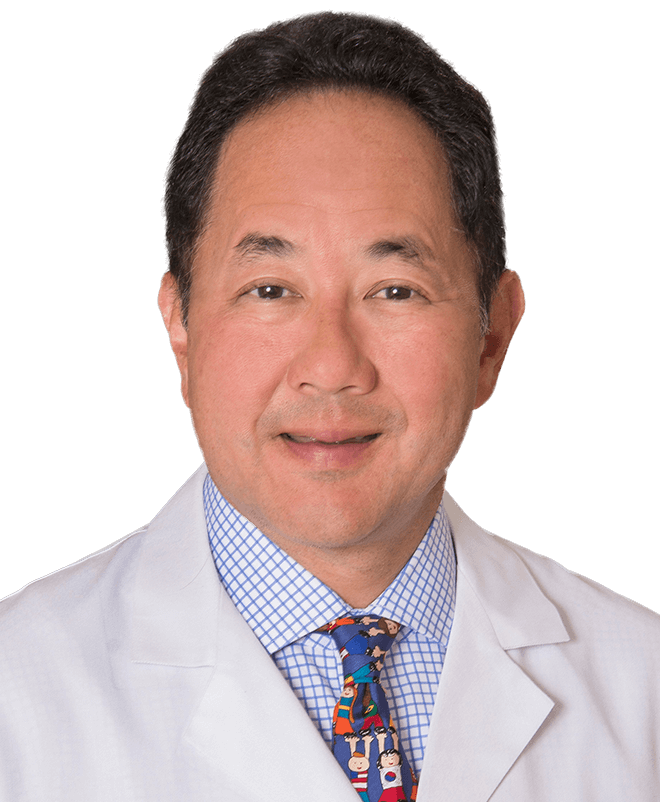 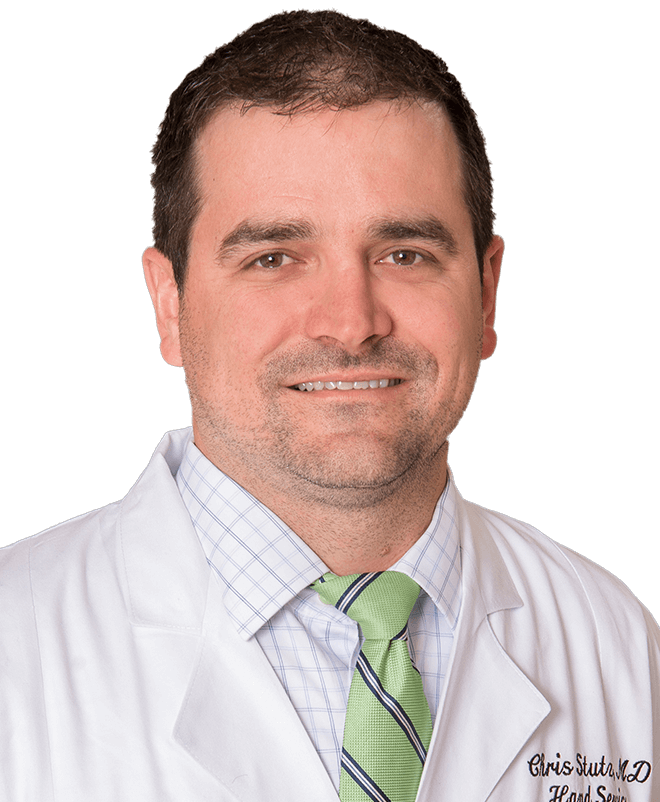 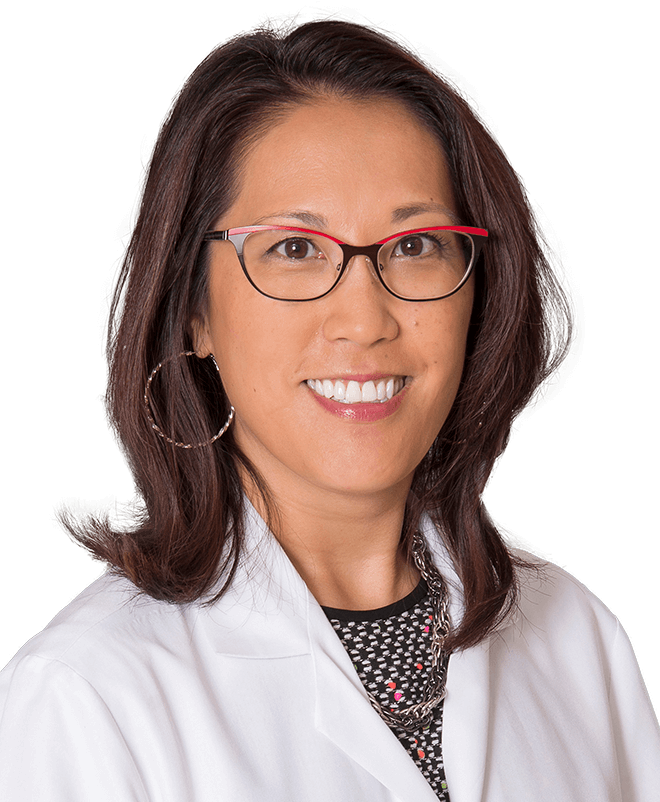 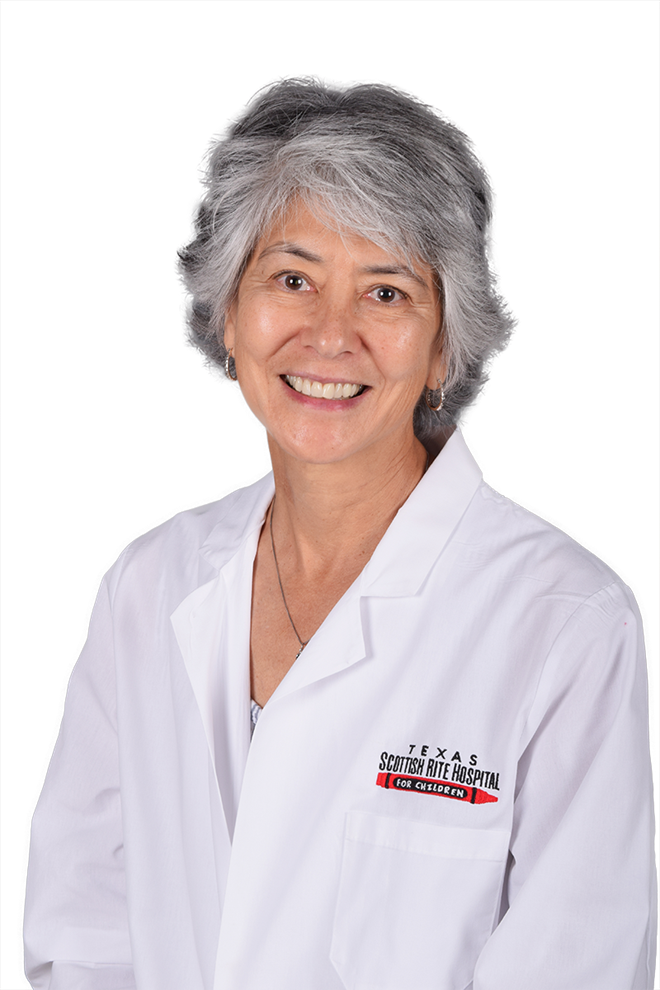 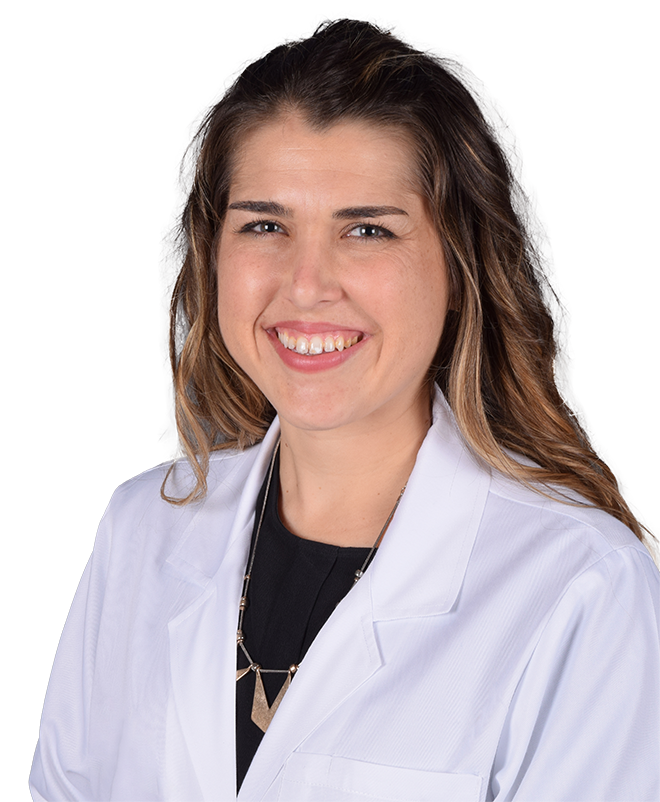 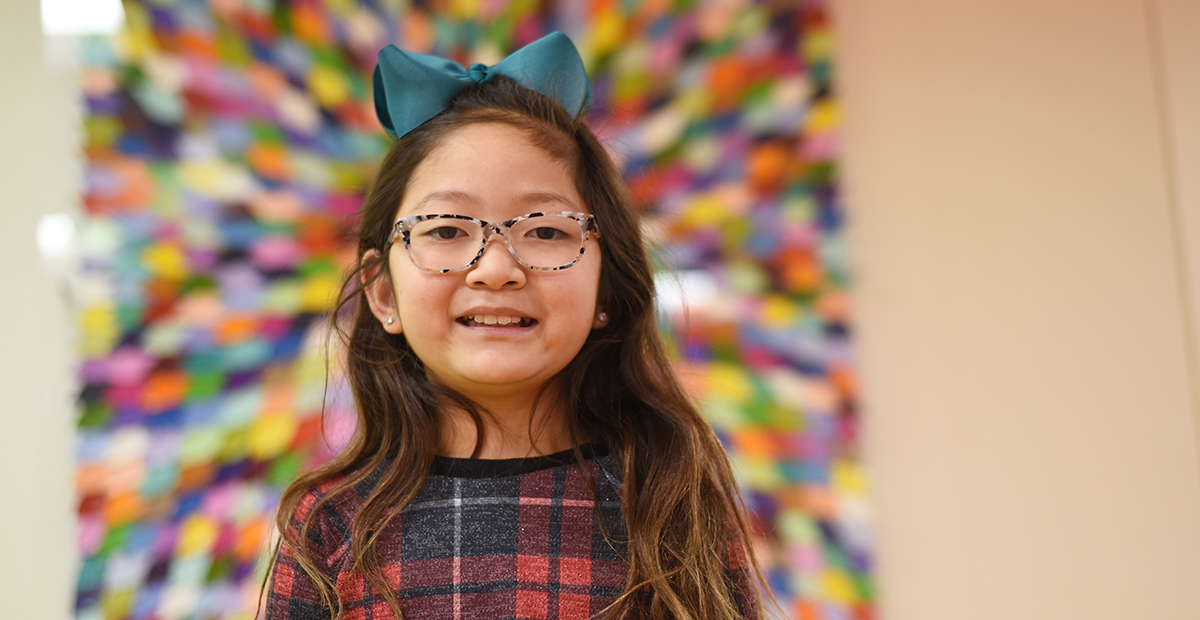 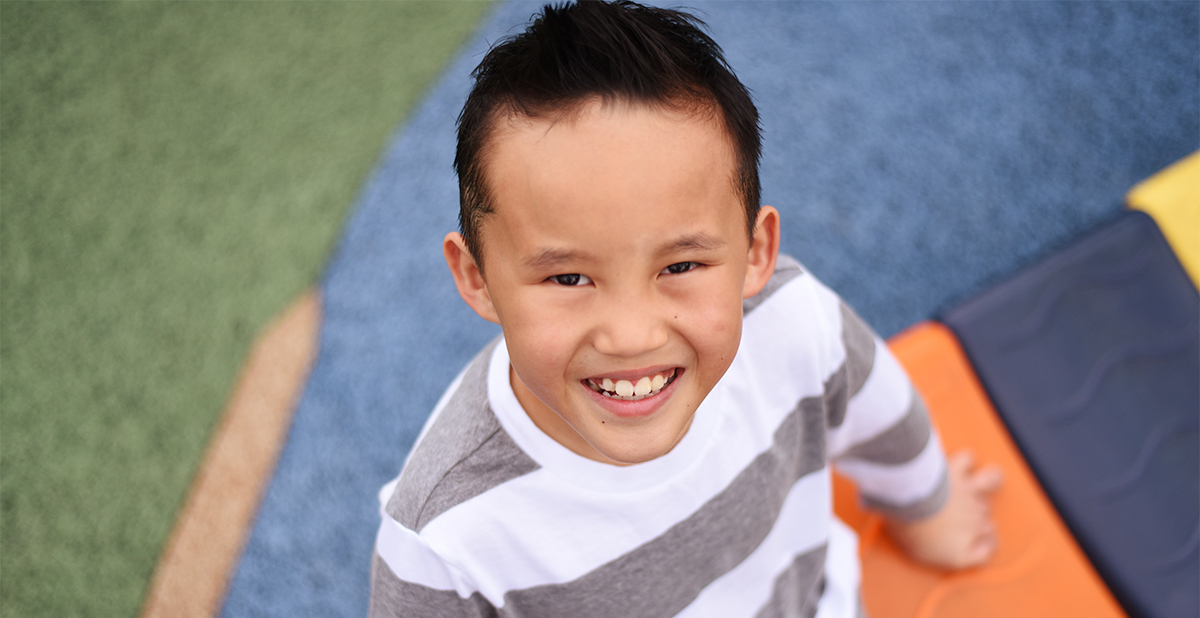 Dec 23, 2021
Pollicization: What Parents Need to Know
Read All 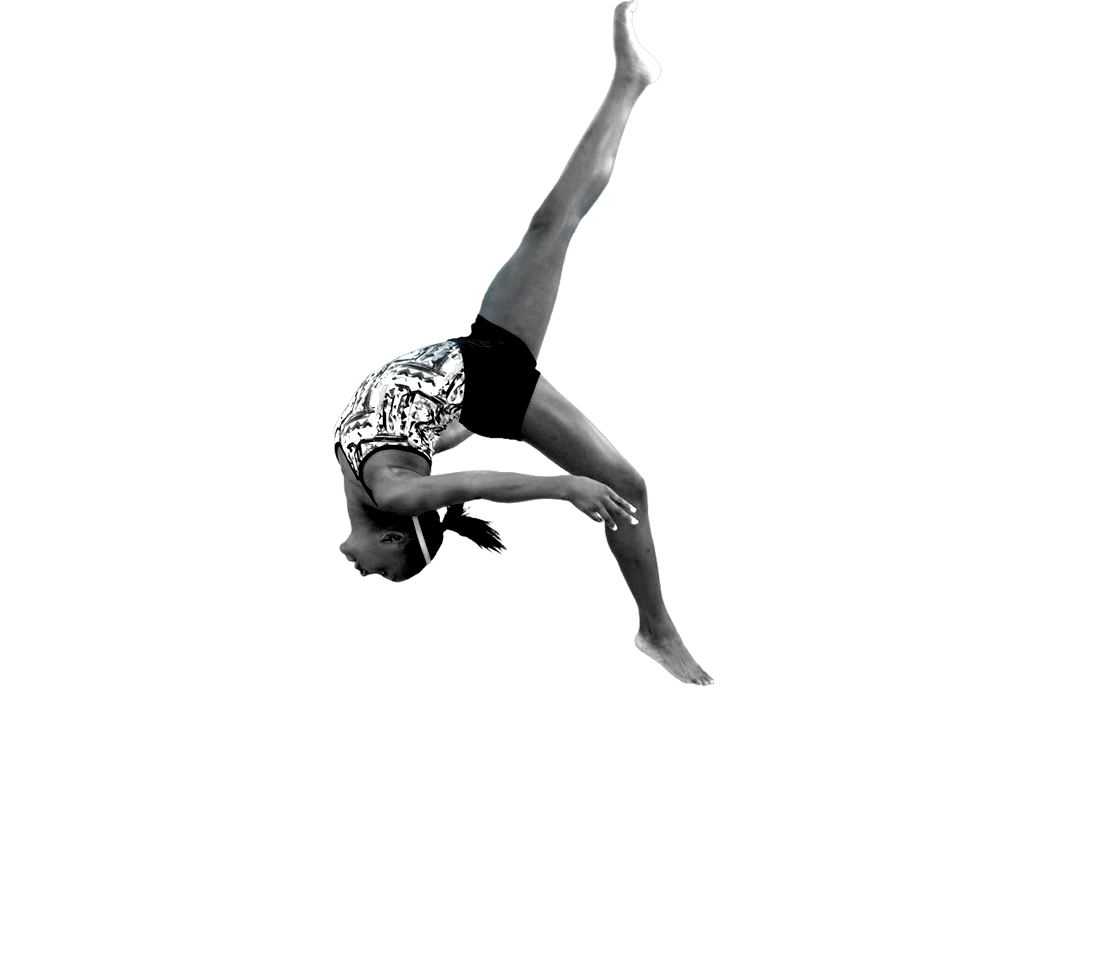