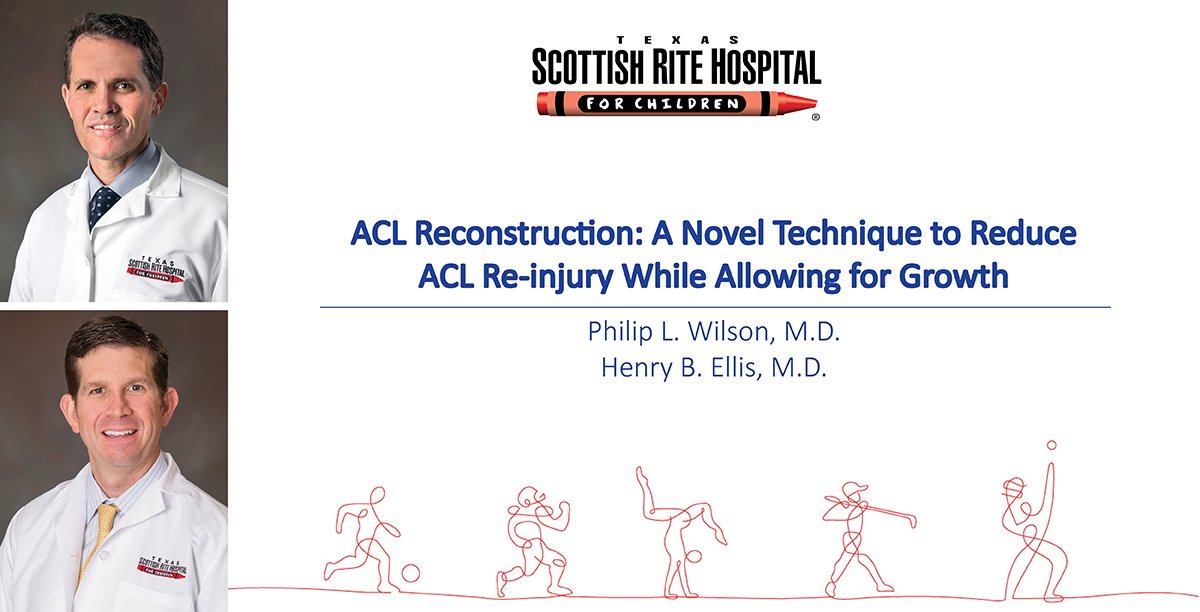 Too many young and growing athletes who have an ACL injury and reconstruction reinjure the same leg or have a new injury in the opposite leg within two years of the initial reconstruction. In fact, the rate of re-injury can be as high as one out of every four (25%). “Young children and adolescents are the most challenging to treat after an ACL injury because their growth plates are still open,” says Wilson. “Because of this and their commitment to returning to a high level of activity, they require special techniques to both allow continued growth and give them the best chance of not re-tearing.”

Since 2012, our team has been studying the results of a unique approach for this surgery. Our experts have combined a surgery intended for younger children (less than 12 years old) with a commonly used procedure for an older child. This approach has resulted in a reduced rate of re-injury to approximately 5% compared to 25%.

While allowing for uninterrupted function of the growth plates, the technique provides additional support when compared to other treatments for this rapidly growing population. The technique adds both additional lateral knee support as well as added ACL graft size, both of which have been demonstrated to reduce the risk of ACL reinjury. The reduced rate of secondary ACL injury in the study are less than half of any other reported results in a similar group. In many cases, ACL injuries take very young athletes out of play for a year. This important step in reducing the risk of secondary injury helps to ensure that athletes can stay active once they are cleared to return.

“This surgical technique is very promising,” says Ellis. “As an institution committed to innovation, we are proud of the work that has gone into this project. It is rewarding to help athletes get them back to doing what they love and know that they have a much lower risk of re-injury.”

This research study was presented at the 2019 annual meetings of two prestigious organizations: Pediatric Orthopedic Society of North America and the American Orthopedic Society of Sports Medicine. The manuscript has also published in a highly rated, peer-reviewed journal American Journal of Sports Medicine. The data include outcomes from this procedure in almost 60 athletes (age 11-16 years) collected over a five-year period. The combined TPH/ITB technique has a low re-injury rate (5.3%) and high return to sport rate (91%) and a low risk of minor growth-related changes (5.5%).

Learn more about the ongoing research in the Center for Excellence in Sports Medicine.