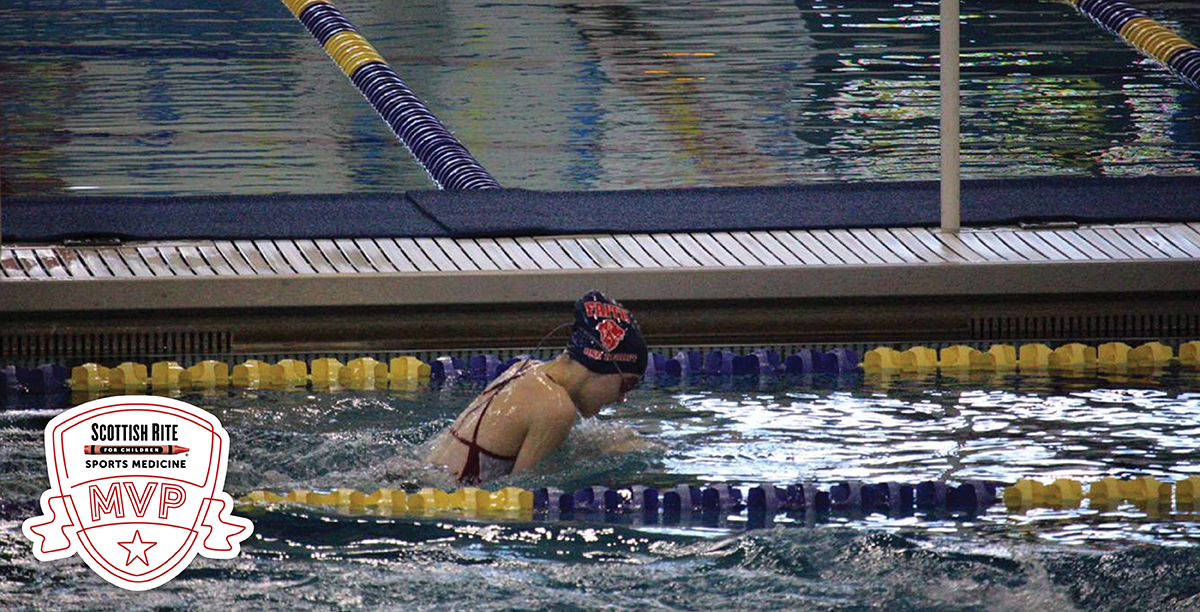 Ellen has always been a competitive person, especially in the pool. “Even when I first started swimming competitively in sixth grade, I would tell myself that no matter who was in the lane next to me, I was racing against them,” says Ellen. That fierce competitive spirit has always pushed her to be the best she can be in all that she does. When an injury forced her out of the pool and into surgery, Ellen competed with herself to be her best at physical therapy to get back to doing what she loves.

When Ellen was 9, her favorite sport was soccer. After an injury on the field, she began swimming for physical therapy. She returned to soccer once she had recovered, but Ellen quickly went back to the pool because she 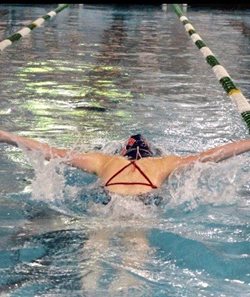 realized how much she loved swimming. “I could tell Ellen was a natural swimmer from the second she hopped into the pool,” says Ellen’s mother, Bonnie. Ellen swam with a local club team in Southlake, the North Texas Nadadores, for a couple of years until pain began to slow her down. She spent about a year in and out of the pool, visiting different doctors, but there wasn’t a definite diagnosis until they visited Scottish Rite for Children.

Pediatric orthopedic surgeon Henry B. Ellis, M.D., diagnosed Ellen with labral tears in her hips. “Labral tears are not commonly associated with swimmers, but we are seeing more and more of this, and they may be underreported,” says Ellis. In addition, Ellis explains that hip impingement and labral tears like Ellen’s primarily occur in adults, but our team is seeing it more in young athletes. “We initially treated Ellen’s injury with physical therapy while trying to balance in-water training with cross-training and dryland exercises. Eventually, she took a break from swimming for a short time to help with the pain.”

In some kids, like Ellen, non-operative treatment doesn’t allow the labral tears to heal. Because of this, Ellis and his team proceeded with surgery to fix the labrum and address the bone around the hip to prevent it from happening again.

Ellen returned to physical therapy the day after her surgery. It was tough at first, but her competitiveness kept her motivated. “There was another kid about her age that was doing physical therapy at the same time, and Ellen was quietly competing with her in her head,” says Bonnie. “We worked with several physical therapists. We found that God provides what you need at the right time. We had perfect people for the different stages of healing that she was going through.” As physical therapy continued, Ellen joined the Grapevine Faith Christian School swim team. Just 13 months after her second surgery, she qualified for the Texas Association of Private and Parochial Schools (TAPPS) State Swim meet. She swam in the medley relay and individually in the 200 breaststroke.

Ellen says that she has learned a lot from her experiences. “I think, most of all, I learned that God has a plan for my life. Even when I didn’t understand why I was in so much pain, I grew in other areas and realized I could do more than sports,” she says. Ellen also loves art, and this experience has helped her to figure out her art style. “She’s being pretty humble when she says she loves art. She was at the VASE (Visual Arts Scholastic Event) regional art competition and qualified for state. She ended up winning a Gold Seal 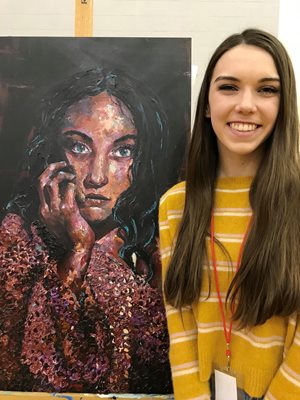 at the state competition, which is the highest ranking!” says Bonnie joyfully.

Ellen is now training with her team, and she is excited to swim in her junior year, but she also wants to continue with her art. “It’s been good to do something different since I used to just swim all the time,” she says. “That balance is good.” Ellen encourages other young athletes to find that balance and not to rush their physical therapy. “Be determined, but don’t hurt yourself from trying too hard, because that’s kind of what I did. I tried pushing through it, and it just made it worse. I’m not back to swimming as many hours a week as I used to yet, but I’m definitely healed.”

Bonnie shares that they loved their time at Scottish Rite. “The care and the love shown by everyone was amazing. As a mom, when the doctor looks straight at your child and really talks to them and takes the time to get to know them as a whole person, it makes the experience incredible.” Ellen adds, “Dr. Ellis was really good about telling me what was going on instead of just telling my parents. He helped me understand why we were doing all the things like injections and physical therapy, and why everything needed to happen, and he told me about how my surgery was going to be.”