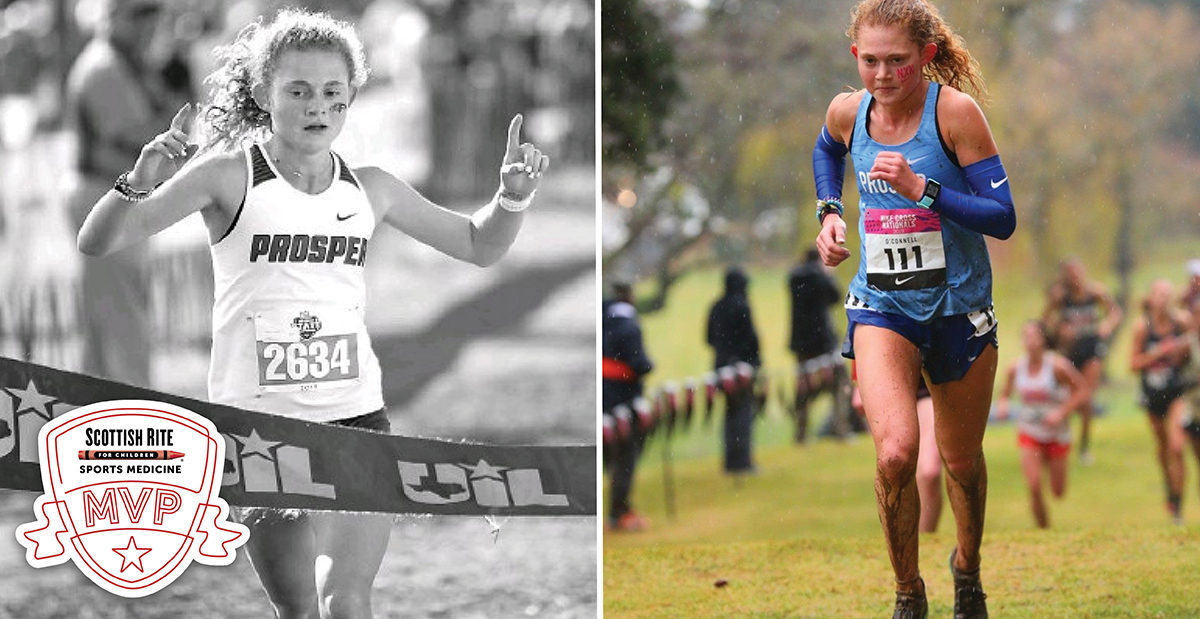 How Aubrey Got Back On Track

Aubrey has always had a natural ability to run. Her parents, Mike and Stacia, first noticed her gift on the soccer field when she was 4 years old. She flew up and down the field for several years, even playing competitively in the Elite Clubs National League (ECNL). While training, her coach often timed the team as they ran for two miles, and Aubrey was consistently the fastest. The speed and endurance that Aubrey displayed while running gave her and her family the idea to compete in track and cross country as well as soccer. Aubrey competed in both sports until her sophomore year at Prosper High School when she decided to devote all of her time to running.

“I like track and cross country,” says Aubrey. “Usually, I like the one I’m doing at the time the best.” Unfortunately, when serious competitions were approaching last fall, she noticed that something wasn’t quite right with her right leg. “It started bothering me during practices, and it kept getting worse,” says Aubrey. The family took her to Scottish Rite for Children Orthopedic and Sports Medicine Center in Frisco, where certified pediatric nurse practitioner Chuck Wyatt, M.S., CPNP, RNFA, determined that Aubrey had strained her right hamstring.

Aubrey began physical therapy at Scottish Rite. Lorenzo Vite, P.T., guided her through a sports rehabilitation program consisting of strengthening and stretching twice a week for four weeks to restore her hamstring. “As an athlete trains consistently in a sport, specific movement patterns develop associated weakness, tightness or stiffness,” says Vite. “We identified these tight and stiff structures during Aubrey’s examination. Then Chuck Wyatt and I collaborated to determine the best treatment plan for her.” During thi

s time, Aubrey took a break from running to concentrate on healing. “It was tough sometimes, but it got better,” she says. Her rest, treatment and hard work paid off because before long, she was back running cross country and qualifying for State competitions. “She won District, and then Region, and then she won the 6A State Championship!” says Mike with pride.

Aubrey is still doing great today. “I don’t hurt at all. I don’t have any trouble running,” she says. She is doing so well that she was recently recognized by USA Today as the Girls Cross-Country Runner of the Year for the Dallas area.

Now, it seems like nothing can slow Aubrey down, not even the coronavirus pandemic. “We trained on our own during the spring, but this summer, I’ve been able to start back up with the team. We have to wear masks when we meet up, but once we start running, we can take them off. COVID-19 hasn’t slowed down my training.” She hopes to run Division 1 track and cross country in college.

Aubrey has some simple advice for young athletes that may help prevent them from going through what she went through.
“Listen to your body. If you are injured, get the help that you need,” she says.

Our team advises that putting off necessary care may make things worse. “It is important to not delay when musculoskeletal issues arise that impair the athlete’s competitive training regimen,” says Vite. The right care at the right time may help an athlete wrap up the season the right way, instead of cutting it short.