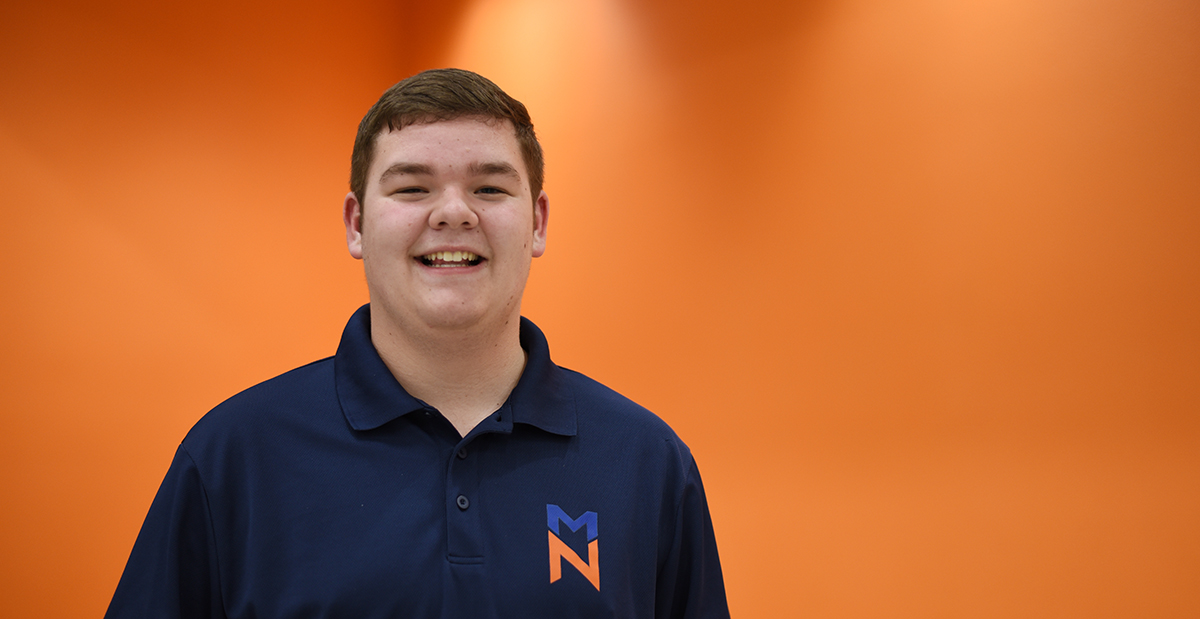 Luke's Journey: Not Missing a Beat Through Scoliosis Treatment

The rhythm, the tempo, the heartbeat — all fitting descriptors for the function of a band’s percussion section, but using an even more compelling name like the backbone depicts their role more succinctly. Just like a spine, all those sharp pops of the quad drums, the satisfying crashes of the cymbals and the low, palpable rumbles of the bass drums provide stability, support, flexibility and movement to the ensemble. No one knows this juxtaposition more personally than Luke, the McKinney North High School bass drum percussionist and Scottish Rite for Children patient cared for by our scoliosis experts.

Plenty can be learned about adolescent idiopathic scoliosis (AIS) by following Luke’s journey. AIS, or scoliosis with an unknown cause starting after age 10, makes the spine curve or twist into a “C” or “S” shape. Luke’s personal experience covers the broad spectrum of how the progressive condition is diagnosed, observed and expertly managed with an individualized treatment plan.

“Luke’s pediatrician identified the minor curvature of his spine and uneven shoulders at his 9-year-old well visit,” Luke’s mom, Christy, says about the outset. “The pediatrician immediately referred us to Scottish Rite, and the initial plan was to monitor Luke every six months to identify any changes that may occur.”

Scoliosis Observation and Expertise
Luke and Christy’s first visit at Scottish Rite for Children was with Amy L. McIntosh, M.D., medical director of clinical safety and a pediatric orthopedic surgeon. “I think that’s one of the greatest things about Scottish Rite — we have so many treatment options for scoliosis,” McIntosh says about the expertise and exceptional care the institution offers.

Clinical observation might not seem like much of an active plan at first, but consistent monitoring of the child’s growth is key. Catching any progression in spine curvature is crucial for effectively managing scoliosis. Christy, a registered nurse, is the coordinator of health services for McKinney Independent School District, which serves more than 23,000 students in North Texas. She has experience with AIS through her work with state-mandated scoliosis screenings in school as well as training other health professionals about the condition, so McIntosh and Christy are on the same page about early detection. “Scoliosis screening is very important.” McIntosh says. “Catching a curve early, when it is small, is the most important factor when it relates to brace treatment success.”

A Brace Just for Luke
As Luke continued to grow, unfortunately, so did his curve. McIntosh first prescribed a Providence brace, or a nighttime brace made for smaller curves, for Luke to wear while he slept that would help to slow his curve progression. “I thought it would just go away like a sickness, like braces for your teeth,” Luke says.

His new brace, along with all of Scottish Rite patients’ braces, is custom-made for his curve. “The coolest thing about our bracing program is that the orthotists work at Scottish Rite, and they make all the braces in-house,” McIntosh says. “If you are going to wear a brace, it might as well work really well for you.”

And during each patient’s clinic visit, the multidisciplinary care team specific to the child’s condition is nearby. “We have the orthotists with us, the nursing team, physicians, the physical and occupational therapists — everybody’s ready on hand in the clinic to provide the best comprehensive care for each patient,” Chief of Staff Daniel J. Sucato, M.D., M.S., says. As director of the Sarah M. and Charles E. Seay/Martha and Pat Beard Center for Excellence in Spine Research, Sucato leads an institution-wide team that focuses on researching the cause and behavior of scoliosis in children and adolescents and controlling and correcting curve progression with innovative treatments.

More Hours in the Brace
As Luke kept growing, again, so did his curve. McIntosh had more in her arsenal and upped his support to a custom thoracolumbosacral orthosis (TLSO) brace. Made for wear under clothing day and night, the TLSO brace wraps around the upper body from under the arms to the pelvic bone. Luke’s curve affected both the upper, or thoracic, and the lower, or lumbar, regions creating a twisted “S” shape.

Patients, like Luke, wear their braces for 18 to 24 months for many hours a day. That timing is determined by the age at presentation, the curve magnitude and how much growth remains. “Currently the brace is the only treatment that has been scientifically proven to prevent the progression of scoliosis to a surgical magnitude,” McIntosh says.

Correcting Scoliosis with Surgery
“He wore his brace until the ninth grade, and he was so compliant,” Christy says. “He even tried to wear the brace while he was in marching band while carrying  the bass drum, but he couldn’t. It was too much, so  he started taking it off for band.”

Luke literally and metaphorically carries the beat on his back while he zigs and zags across the football field holding his enormous bass drum. Fastened to a frame that hooks over both shoulders, the drum weighs more than 20 pounds and juts out far enough to move when the wind blows. Luke loves to be a part of the drumline, and when asked if he plans to continue studying music in college, he replies, “100 percent.” Some of his best friends are in the band. “It’s a great way to meet people, and I’ve made close friends that will probably last quite  a while,” Luke says.

Luke wore his brace up to 22 hours a day, but his curve kept progressing. When his curve grew to larger than 50 degrees, surgical correction was recommended. Luke experienced some discomfort and breathing difficulty as well. “When it was really bad, like after band practice, after marching out there with my drum for a while, it just hurt,” Luke says. “I tried to get Luke’s spine through it as best as I could, X-ray before surgery but sometimes I’d have to sit out and do stretches. It wasn’t bad to the point where I couldn’t do anything, but it was just constant.”

Getting ready for surgery, Luke looked to McIntosh to explain the next steps. “She gave me a 3-D model of what the surgery would look like on my back,” Luke says. “I got to play with it and bend it to see the difference between a normal back and a back with spinal fusion. It made me feel better.”

Luke had a posterior spinal fusion with instrumentation and bone grafting, the most common scoliosis surgical procedure. By attaching rods to the spinal column and then grafting bone to the affected area, the spinal curve is corrected and encouraged to fuse to prevent further curve progression. Following surgery, the fused section is no longer flexible.

Recovery takes several months for patients to get back to their desired activities, and it takes up to a year for the spinal fusion to fully heal. During Luke’s recovery, the drumline and their teacher Michael Reed brought a huge card signed by everyone with well wishes during a visit to his house.

After years of wearing a brace and surgery, Luke has advice for others going through bracing and surgery for scoliosis. “If they are going through bracing, I’d tell them to wear their brace as much as possible to try to avoid the surgery,” Luke says. “If they are about to get into the surgery, don’t worry about it too much. They are professionals, and they know what they are doing.”

Luke gained a few inches in height and has no more pain following surgical correction. “It is a lot easier to do stuff with my back like this,” Luke says. Even though there are reminders each day about his spinal fusion, he says he wouldn’t change a thing about his treatment at Scottish Rite for Children. “You are in the best hands,” he says. “They know exactly what to do.”