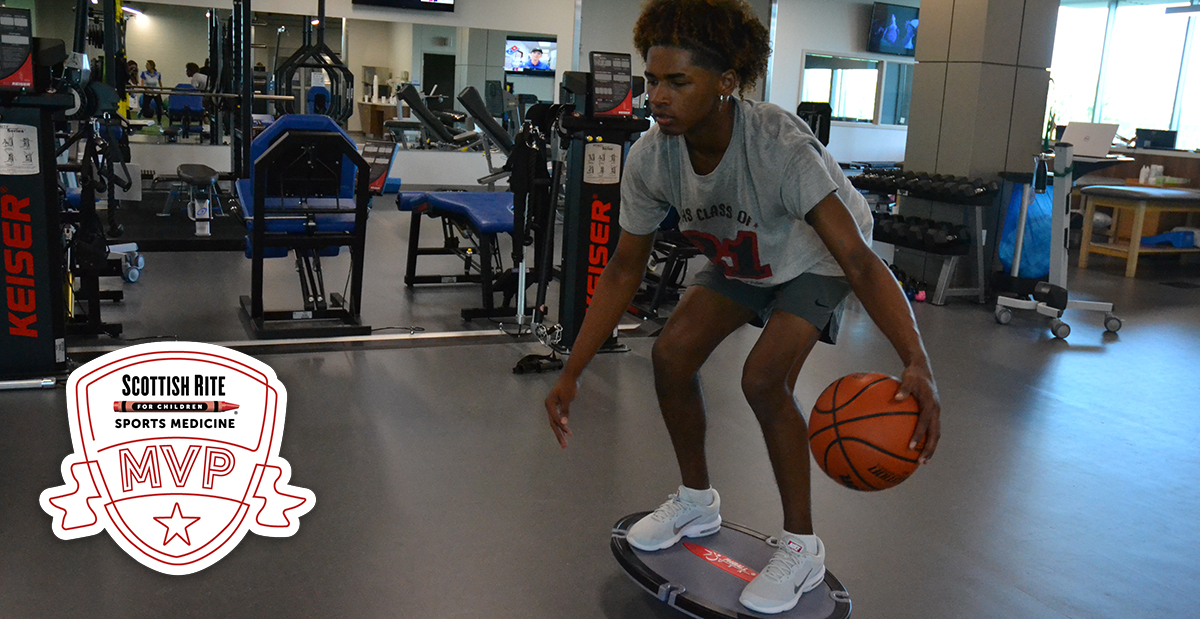 When an injury put basketball phenom Myson on the bench, the team at Scottish Rite for Children helped him recover and return to the court.

Myson has been playing basketball since he was 5. Just a few years after he began, his mother, Courtnee, realized he had a gift for the game. “When Myson was 9, his team was losing a game, something like 70 to 8, and Myson was hurt because he was giving it all he had,” says Courtnee. “While this was going on, a man sat next to me and told me that Myson was really good. I’m thinking, ‘Really? We’re doing pretty badly.’” The gentleman shared that his son was the number one player in the nation, and she realized that he might know a little more about basketball than she did. After watching Myson, he told her he had “nice, raw talent.” She says she started thinking, “Maybe there is something to this, maybe he could be good.”

They were right! Myson continued to play and hone his skills to the point that he was set to play on the Liberty High School varsity basketball team his freshman year. Before the season started, Myson attended a basketball camp to help him get into the groove, but in one of the games, he went for a block and came down wrong. “My knee started hurting a little bit, but I didn’t think much of it at the time,” says Myson. As he was recognized for an award at the end of the program, he stumbled and  noticed that people were staring at his swollen knee. “That’s when I realized I had done something bad to it.”

Myson and his mother went to a hospital near the basketball camp, and they checked him out for broken bones but didn’t perform an MRI. Myson figured that if bones weren’t broken that it was a minor injury and that it would get better, but over time he began favoring his knee and keeping weight off of it to the point that he began to lose muscle. That was when they were referred to Scottish Rite for Children Orthopedic and Sports Medicine Center in Frisco. At Scottish Rite, an MRI showed that Myson had torn his ACL, his meniscus and damaged his cartilage as well. “That was tough to hear,” says Myson.

Pediatric orthopedic surgeon Henry B. Ellis, M.D., explained the required surgery to Myson and Courtnee and performed the operation. “They put screws in my knee, and they took a ligament from somewhere else and placed it where the ACL was missing,” says Myson. “My knee was reconstructed.” The surgery was a success but getting back in the game would require a lot of physical therapy, which started much sooner than Myson expected. “I went into rehab the same night as my surgery,” says Myson. “I didn’t plan on using my leg so soon. It hurt for a while, but soon I felt more comfortable with my training and working with Jessica in physical therapy.” Myson’s lead physical therapist, Jessica Dabis, P.T., created a plan specifically for him to make sure he could get back to basketball safely.  “I was doing things on that one leg like balancing on it and gaining strength back because I had lost the use of those muscles after surgery, so I had to rebuild the leg back to normal,” says Myson.

The therapy team at Scottish Rite also helped Myson with his mindset.

“They treated me like a pro athlete,” says Myson.

“They gave a mentality where I wanted to get better, made me motivated and made me want to work my leg out. At first, I didn’t want to do it because now I had free time, and I was just sitting in my room, and I didn’t want to work out, but when I went to physical therapy, Jessica made me realize I needed to get my leg right, maintain my focus on what my real goals were, and get back to basketball.” “Thank God for physical therapists,” says Courtnee. “Jessica was great. The whole staff 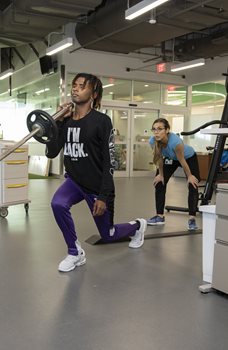 After passing functional movement tests, Myson returned to basketball the following season, and things went well, but the following AAU (Amateur Athletic Union) season, he tore the ACL in his other leg. While that was another process to go through, at least it was a process that he already knew and understood from his previous injury. Unfortunately, athletes are at a higher risk of an ACL injury on the same or opposite leg after having had one.

Now, a little over a year sincehis last surgery, Myson says that his legs feel great and that he has total confidence in them. “I feel 110% about my knees,” he says. This is in part to the care he received and his continued commitment to strength and conditioning. Myson plans to attend college and perform at the highest level in basketball, but he has other interests that he wants to explore as well. “I really like art, so I want to major in something with art,” says Myson.

Myson advises young athletes to never take sports for granted and to always stretch, keep themselves moving and listen to their bodies. He also encourages them to have an interest outside of sports.

“If you get hurt or taken away from the game, you won’t have anything to rely on, and you won’t be able to adjust to how life is,” says Myson.

Courtnee adds that young athletes should not be so much in the moment and they should know that if they trust the process and believe in themselves, it will all work out for their good. “I believe that my son is a stronger athlete mentally, physically and emotionally. In all that he does now, he has more depth from this. This gave him strength. He trusts his body more than he ever did, and I think he also knows to what degree he can rebound, because this has been a full journey, for sure.”