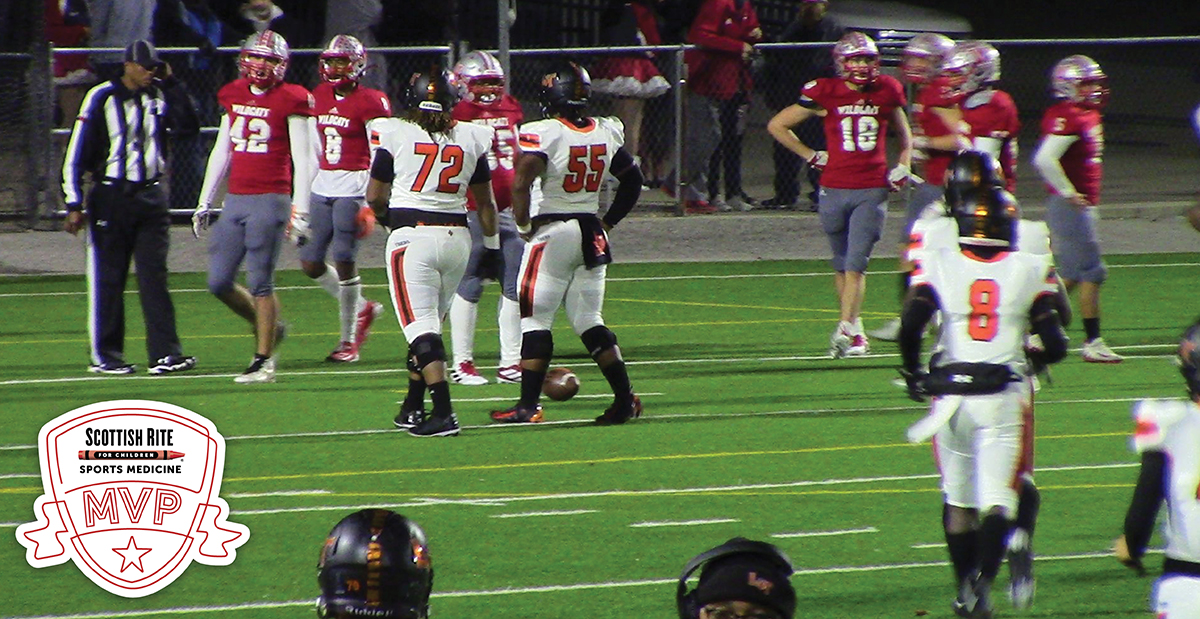 The Story of Kalen’s Incredible Comeback

Advice from an MVP – “Don’t Give Up On Anything”

During his junior year at Lancaster High School, offensive left tackle Kalen and his teammates were practicing for the second-round high school football playoff game. Kalen noticed an unfamiliar formation from the defense, and during the chaos of the play, his leg was caught between the left offensive guard and the defensive end. “I pulled my leg out from the pile, and I was able to step at first, but with my next step, I felt several pops in my knee, and it hyperextended back,” says Kalen.

At first, Kalen and the trainers thought it would be okay with some ice, but as he changed clothes, the trainers discovered that his knee had swollen significantly. They realized that they needed a physician to examine his knee, so his mom took him to a nearby urgent care center. “They told us that the problem was a pinched nerve, but I had a feeling that there was more to my injury than that,” says Kalen. That’s when Kalen’s mom called the sports medicine clinic at Scottish Rite for Children. They helped Kalen with knee pain when he was younger, so she knew they could help him now.

Kalen’s mom called Scottish Rite the day he was injured and scheduled an appointment for the next day. During his appointment with pediatric orthopedic surgeon Philip L. Wilson, M.D., an X-ray showed no broken bones. “Kalen had significant injuries with anterior cruciate and lateral collateral ligament instability and loss of peroneal nerve function noted during his physical exam,” says Wilson “An MRI was our next step to assess all of the ligaments and other soft tissues inside and around the swollen joint.”

After reviewing the MRI, Wilson informed Kalen he had indeed torn the multiple ligaments in his knee as well as the lateral hamstring muscle insertion when it hyperextended. It was confirmed that the peroneal nerve, a nerve that controls muscles lifting the foot, was severely stretched during the injury and it was unclear how well it would recover. “They compared me to Jaylon Smith with the Cowboys because he had a similar injury that he came back from, and that was fine, but I’m my own person, so I really wanted to see what I could do,” says Kalen.

The team provided a brace to stabilize his knee until surgery was appropriate. 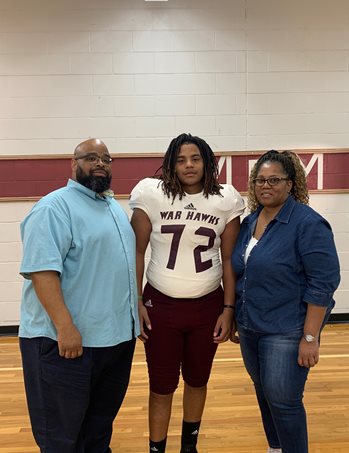 He went to physical therapy to help with strength and range of motion in his knee. “They wanted to make sure that my leg was at a certain strength level before I had surgery,” says Kalen. “I feel like that was a good thing, so I didn’t go into surgery feeling too weak.” In some cases, like Kalen’s, orthopedic procedures need to be done at different times. Kalen was scheduled for two surgeries. His first surgery involved release of scar tissue surrounding the nerve, which was at a 90-degree kink, and reconstructing the lateral collateral and hamstring tendon, which was torn off the bone. After his first procedure, Kalen was back in physical therapy, working hard to strengthen and control his leg. Two months later, Kalen was back in the operating room for a reconstruction of his anterior cruciate ligament (ACL).

Kalen continued physical therapy after his second surgery. He says it was tough at first, but he was motivated to push himself so he could return to his teammates. He also says his father kept him focused and helped him stay on the right path. Recovery and a safe return to contact sports can sometimes take a year, but Kalen returned in time to play two games his senior year at Lancaster, and to participate in one-on-ones with other teams. His hard work and determination paid off, as Kalen just started college at McMurry University in Abilene, where he was recruited to play offensive left tackle on the football team. “My experience taught me to never give up,” says Kalen. “It was hard, and there were moments when I felt down, but I had to keep my head up and push myself to work hard so I could come back.”

Kalen wants young athletes with similar injuries to know that they can never give up. “You can’t let it phase you. When you first get hurt, it’s going to be tough. You are going to feel sad that you can’t be out on the field to help your team, but you can still be there to support them and work with them as you are recovering. Don’t give up on anything.”