With Her Knees Back in Sync, Abbee's Ready to Take It From the Top!

Abbee, age 16 of Denton, isn’t like most kids her age. She attends a unique online school just so that she can devote as much time as possible to her true passion – dancing. She is dedicated, spending more than 40 hours a week practicing her dance, earning an invitation to participate in an exclusive pre-professional program at The Joffrey Ballet School. Abbee dances all day, every day and is determined to pursue a career as a professional dancer. “I knew from a young age that this is what I wanted to do forever,” she says. When Abbee began noticing that her knees were “buckling” while she was dancing, she knew something was wrong. “It would happen while I was dancing, and it would take me out of dance for a few days until the pain went away,” Abbee says. “Eventually, it was happening so often that we decided it was time to see a doctor.”

Abbee visited our Sports Medicine clinic in Frisco to see Jane S. Chung, M.D., pediatric sports medicine physician for Scottish Rite for Children who has a passion for caring for female athletes and dancers. After discussing her history, performing a physical exam and reviewing X-rays and an MRI, Dr. Chung explained that Abbee’s kneecaps sit higher than normal. This position of the kneecap is referred to as patella alta and it can cause patellar instability 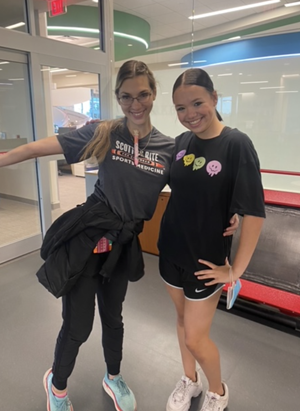 or patellar subluxation, which is a partial dislocation of her kneecap. Chung reviewed the treatment options, ranging from physical therapy (PT) to surgery. As many patients do, Abbee chose a nonoperative approach first. She began PT to strengthen the muscles in her knees right away, working with physical therapist Jessica Dabis, P.T., D.P.T., O.C.S., to complete exercises to reduce the frequency and hopefully prevent dislocations. After completing PT, Abbee returned to her rigorous dance schedule, and she noticed that her knees felt much stronger.

Several months later, Abbee again experienced patellar subluxations while dancing. One of these episodes felt very different and when she followed-up with Dr. Chung, her X-rays showed that her medial patellofemoral ligament (MPFL) had completely detached from the kneecap in her left knee. After some discussion, Abbee learned that in order to correct the detached ligament, she would need surgery.

Abbee visited with pediatric sports medicine surgeon Philip L. Wilson, M.D., and pediatric orthopedic nurse practitioner Chuck Wyatt, M.S., CPNP, RNFA,  who described the procedure and recovery and put her at ease. In November 2021, Wilson reconstructed the torn MPFL, which also corrected her patella alta. This procedure should prevent the instability episodes in this knee. Abbee began PT with Jessica Dabis at Scottish Rite again to rehab her left knee following surgery, working to get back to dancing

Soon after her surgery, Wyatt and Wilson determined that Abbee’s right knee also had a torn MPFL. Abbee knew this meant she would likely need another surgery, but she wasn’t worried. “I was already going to be out for this entire dance season, why not just get them both done and be completely healthy?” Abbee says. She continued PT of her left knee while preparing for surgery for her right knee, just 59 days after her first surgery. After surgery, Abbee was extremely diligent about her rehabilitation, following every instruction. She continued PT through July 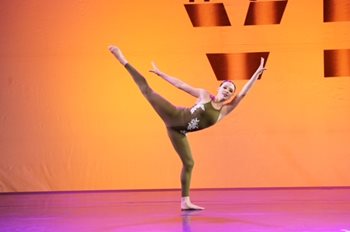 2022, strengthening the muscles in her knees and following her therapist’s prescribed dance-specific rehabilitation progression. This included a step-by-step return to dance skills and movements, building up from modified to full-out participation. She’s now back to doing what she loves most, dancing, and is so thankful for the team at Scottish Rite for helping her get where she needs to be. “Having two back-to-back knee surgeries before the age of 16 is never something I imagined for myself,” Abbee says. “But now I am so extremely proud of myself for making that difficult decision because now I can go back into dance confidently knowing that my knees will be better. I won’t have that fear that my knees will partially dislocate. This entire experience at Scottish Rite has truly changed my life for the better, and I couldn’t have asked for a better team and medical care.”