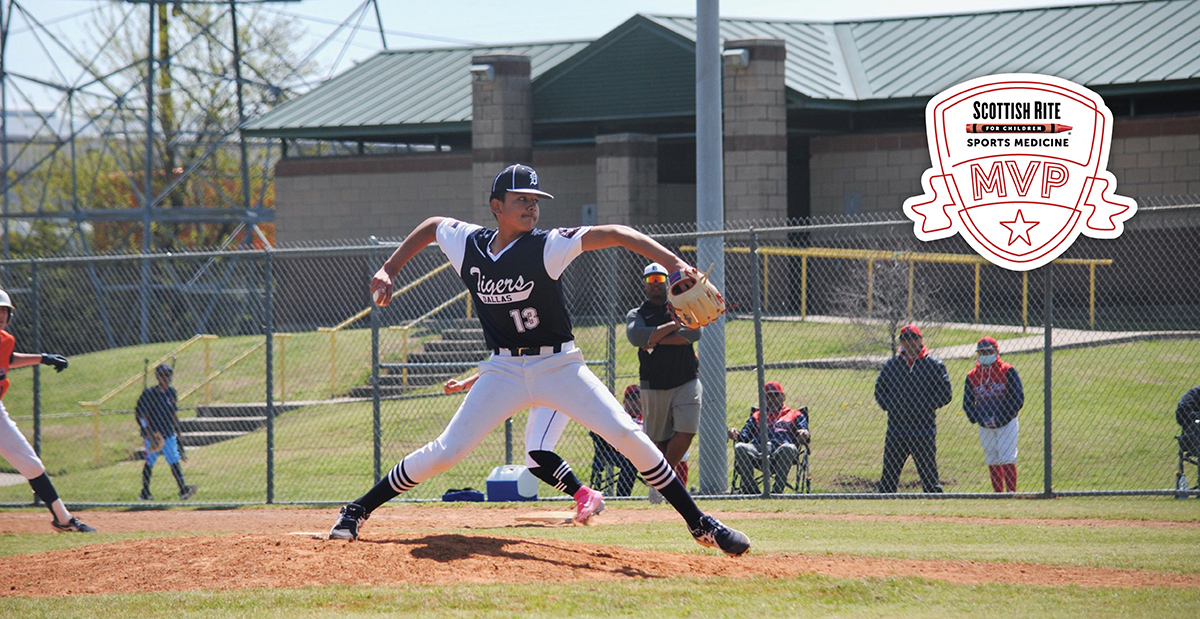 13-year-old Rolando has been playing baseball since he was 4. After learning the basics with his dad, Rolando joined a youth team in Kaufman, Texas, and proved to be a natural. By the time he was 7, he was playing on a select team in the nearby town of Forney. “He’s always had a good at-bat,” says his mother, Alejandra. “He’d hit the ball really hard, and it would go far.” As he continued with select baseball teams, Rolando found he also had a gift for throwing the ball and pitching.

In June of 2020, Rolando and his team were practicing for an upcoming tournament when his right arm began to hurt. He decided to play through the pain, and things were going well until the second game. “I was trying to make a play throwing from first base to third when I heard a pop,” says Rolando. His arm began to swell, so his parents had him sit out the remaining games to rest. After two weeks of resting his elbow, Rolando’s arm was still swollen and painful. His pediatrician recommended that they take him to the Scottish Rite for Children Orthopedic and Sports Medicine Center in Frisco. “She said the facility was dedicated to helping young athletes and that the people there were great,” says Alejandra.

When they arrived at Scottish Rite, X-rays were taken of Rolando’s arm, and they revealed that his arm was broken. “We couldn’t believe it!” says Alejandra. “He didn’t get hit or anything like that. He somehow broke his arm from throwing.” Rolando had a displaced avulsion fracture of the medial epicondyle of his right elbow, an injury to the growth plate on the inside of the elbow. When they heard he would need surgery, they were worried that he wouldn’t be able to play baseball again, but the sports medicine team was very comforting and reassured them that Rolando would get back to the game. During their drive home, pediatric orthopedic surgeon Henry B. Ellis, M.D., called Alejandra to introduce himself and review the plan for surgery to secure the loose piece of bone. “His voice was so calming, and all the information that he gave me made me feel much better,” says Alejandra. “I was so thankful for him.”

Though surgery is an important step in the care of young athletes, the real work is done by the patient starting almost immediately after surgery. Soon after surgery, Rolando met Scottish Rite physical therapist Daniel Stokes, P.T., D.P.T., CSCS, SCCC. With Daniel, Rolando began to regain movement and strength in his right arm. Despite some pain with physical therapy at first, Rolando kept working hard. “We had so many questions, and Daniel would explain everything to me,” says Alejandra. “He would show me what he did with Rolando so I could do it at home with him. He was great.”

When a young athlete is injured, recovery may take longer than skilled physical therapy is needed. Even after several months of therapy focused on the injured area, an athlete is typically not ready to return to their sport. During this transitional time, it is important that the athlete continue training for sport-specific readiness as well as overall strength and movement. Access to proper guidance, supervision and equipment appropriate for their sport will ensure the young athlete trains safely and effectively during their recovery and developmental stages.

The Scottish Rite for Children Bridge Program offers these resources to the patient who completes physical therapy and is searching for continued training with return to sport as their main goal. The program takes place in the sports therapy gym and outdoor turf field on our Frisco campus. “Activities range from general strength and conditioning to sport simulation activities that are age and task appropriate for each athlete,” says Bridge Program coordinator Ian Wright, P.T., D.P.T., CSCS, USAW.

Rolando enjoyed his time in the Bridge Program, where Ian always encouraged and motivated him. “Working with Ian was fun, and he pushed me pretty hard,” says Rolando. “He definitely helped me get stronger.”

In February, Rolando wrapped up his training at Scottish Rite with complete confidence in his elbow. This MVP’s return to baseball has already been a success with home runs, game-winning hits and recognition as “player of the game.” He can’t wait to play baseball in high school. He encourages other young athletes with similar injuries to not give up when therapy is tough. “Work hard, and stay strong and healthy,” he says. Alejandra tells other young athletes and their parents that the process might seem long, but it is worth it in the end. “Scottish Rite helped us with everything we needed from the surgery to the physical therapy and the Bridge Program after,” Alejandra says. “Your child will get better. You’ve got this!”

A letter to Ian from Alejandra:

Because of you, Rolando was able to play his first tournament on the Dallas Tigers select baseball team within eight and a half months after surgery. He really liked the strength and conditioning you offered. He suffered through it but understood that the pain would make him better one day. That day came this weekend in Houston.

He was quiet as usual, but we could tell he was ready to play. They ended up losing the first game 2-6. In the second game, we were down by 1, and he hit a two RBI double to win the game! He was named Perfect Game's player of the game!

On Sunday, he hit an AMAZING two-run homer! Which of course, this momma got on video and was able to get the ball! They won the game 9-5. He pitched 40 pitches, striking out two batters in two innings in the second game. Unfortunately, we ended up losing 8-10 and got eliminated from the tournament.

We had an amazing weekend because of you! Thank you so much for all you do and did for Rolando. I'm sure he will forever remember the pain but will be grateful for the rest of his life. Hopefully, we can join the bridge program again this summer! We liked how you pushed him to the max and even expected more. I know he didn't say much, but he appreciated it, especially when he would get compliments from family members on how good he looked. Thanks again!

Learn more about the Bridge Program.

If your child is a current or former patient, call 469-515-7150 contact bridgeprogram@tsrh.org to inquire about the next session of training classes.