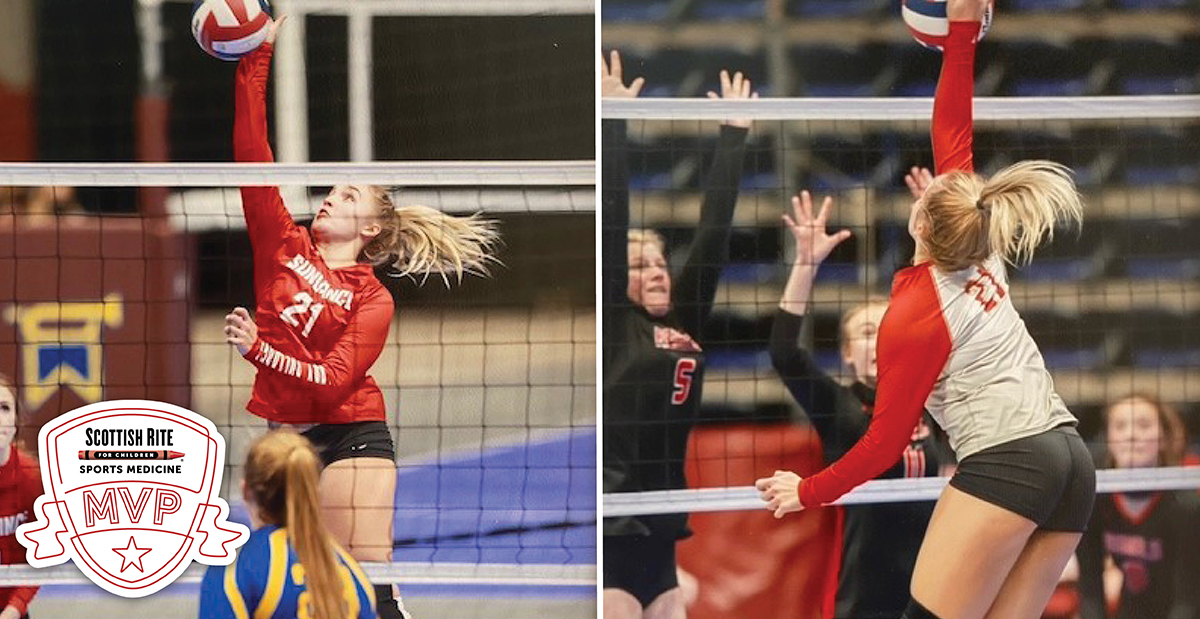 You Can Overcome Anything

17-year-old Sherry of Sundance, Wyoming, is passionate about volleyball. She began playing when she was in first grade. “We start really young in our small town,” says Sherry. While she plays other sports, including basketball, it’s the blocks and spikes on the court that drive her to be the best that she can be. In fact, Sherry’s team won state in her freshman and junior years of high school. But when an old injury resurfaced while playing basketball during her junior year, she and her family trusted pediatric orthopedic surgeon Philip L. Wilson, M.D., director of the Scottish Rite for Children Center for Excellence in Sports Medicine, to get her back on the volleyball court for her senior season.

Before they found Wilson at Scottish Rite for Children, Sherry and her mother, Louise, discussed options with other surgeons in South Dakota. It was determined that Sherry needed a tibial osteotomy – a procedure that changes the angle of the leg to allow the knee and patella (kneecap) to function more efficiently and balance the weight-bearing surfaces in the knee joint – but the surgeons near her home did not have much experience with it. “We were told that the surgery she needed was very complicated and that recovery would be awful,” says Louise. Hope of returning to the volleyball court for her senior year seemed lost. Sherry and her family asked their friend, Dr. Tandy Freeman, if he knew of anyone who was more familiar with the needed surgery, and he referred the family to Dr. Wilson in Frisco, Texas.

Scottish Rite has long been a “destination” for children and teens with highly complex orthopedic conditions. Because some pediatric conditions are relatively rare, providers in rural or less densely populated areas may never even see a patient with the condition. Because Scottish Rite surgeons see patients from all over the country, they perform procedures frequently that others may never perform. This is also why Scottish Rite is known internationally for its pediatric orthopedic fellowship program that has trained pediatric orthopedic surgeons that now practice across the globe.

Louise and Sherry say that their experience with Scottish Rite was positive from the very beginning. Wilson was confident that together, they could meet the goal of getting Sherry ready to play her senior year. “Dr. Wilson was actually in a different country, but he still called us to go over the procedure and to get the surgery scheduled,” says Louise. “We just felt like everybody was on board, and when we got there, it was like, ‘let’s go.’”

Physical therapy was a key component of Sherry’s treatment plan, and she was very motivated. “They said that my recovery would be about six to nine months, which put me back a week or two before volleyball started,” says Sherry. For a while, Sherry wasn’t able to see her physical therapist due to the pandemic, so she checked in through Facetime and did her exercises at home. COVID also prevented her from traveling to see Wilson again in person, but he was able to keep track of Sherry’s progress through telemedicine visits. “I rehabbed my knee so hard, and I made it back at the end of five months, so I could start getting into shape for volleyball about two weeks before I was supposed to!” Her hard work paid off. Not only was she able to rejoin her volleyball team for her senior year, but her team also won the state championship!

Today, Sherry says that her legs feel stronger than ever, but she feels that she is now stronger in other ways as well. “This is definitely the biggest challenge I’ve ever had to overcome, and it just helped with a whole bunch of different skills, like how to persevere through something this big,” she says. Sherry encourages other young athletes to follow her example of perseverance when an injury takes them out of the game. “Even if it seems like it’s going to be the end of the world for a little bit, you can overcome anything if you work hard enough and keep your mind straight.”

Next year, Sherry will attend the University of Wyoming, where she plans to major in kinesiology.