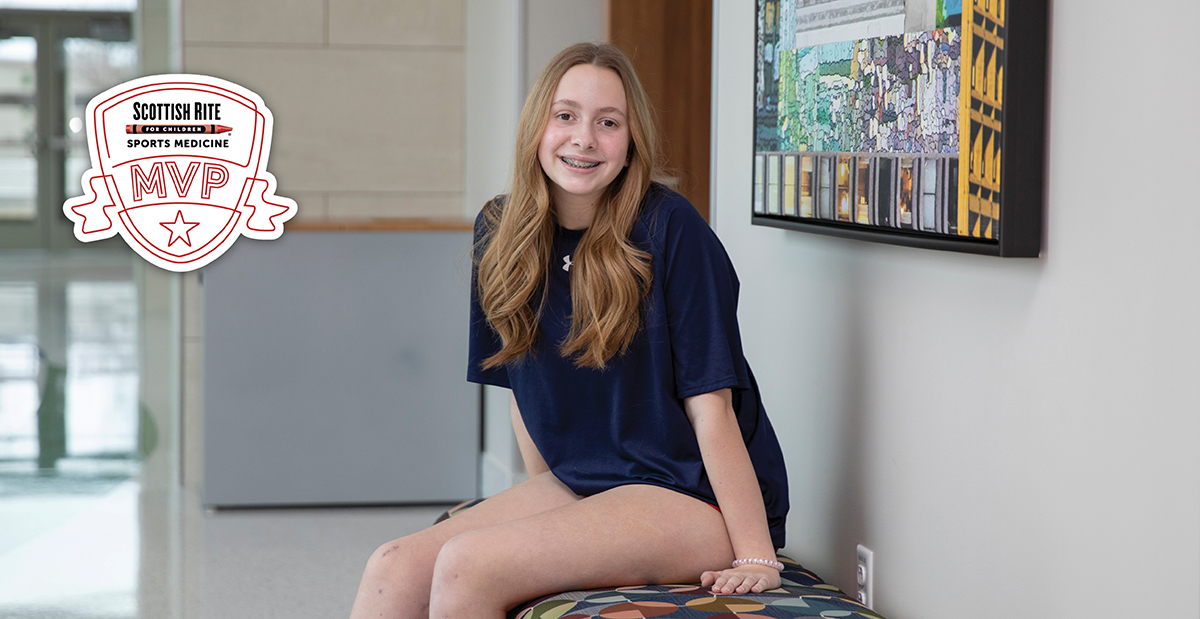 There’s Always Something Good That Comes Out of Everything

At the age of 7, Kate was already an exceptional gymnast with her hopes set on making it to the Olympics. One day during a routine, she was dismounting off the balance beam when something felt weird when she landed. She realized that she had dislocated her left kneecap. When she fell to the ground, her kneecap popped back in place. Kate’s mother, Monica, brought her to Scottish Rite for Children Center for Excellence in Sports Medicine, where she began physical therapy to strengthen her leg muscles and teach her how to control her knee. This is considered a conservative approach and is a common first step for active children who have a new history of patellar dislocation or subluxation (slipping).

“I’ve been doing physical therapy off and on since then, so we kind of live at Scottish Rite,” says Kate. She tried to continue with gymnastics, but her left kneecap continued to pop out of place, making competing difficult. Then after a vault, Kate dislocated her other kneecap. “Basically, these injuries are a result of how God made Kate,” says Monica. The flexibility of Kate’s joints and muscles that made her so good at gymnastics put her at an increased risk of injury. As both knees continued to dislocate during gymnastics, Kate faced a difficult decision. Kate was devastated when doctors told her it was no longer feasible for her to pursue gymnastics, and she realized she would have to leave her dreams of competing in the Olympics behind. Kate was referred to the sports medicine psychologist at Scottish Rite to help her deal with her feelings of loss and encourage her to explore new areas. The psychologist also helped Kate work through her anxiety about her knee dislocations by giving her techniques to cope with her stress. Kate quickly found other activities that she enjoyed – cheer and musical theater. Her cheer coach and theatre director were compassionate about Kate’s knees and gave her modified versions of cheers and dances so she could continue to be part of the team. But unfortunately, her kneecaps continued to dislocate. “One time, I was walking in the mall with my friends, and my knee[cap] popped out,” says Kate. While cheering at a basketball game, Kate’s knee dislocated, and she was scared when she was unable to get it back in.

At that point, they needed to do something more than physical therapy because the episodes were beginning to affect her quality of life. Kate and her family came to Scottish Rite for Children, where they met pediatric orthopedic surgeon Henry B. Ellis, M.D. An important discussion in sports medicine, especially when considering surgery, is to assess the goals of the patient. Kate shared with Ellis that she wanted to cheer at full strength in high school. To get her ready for that, Ellis recommended proceeding with surgery. Monica and Kate felt encouraged with the treatment plan that was designed just for Kate. “I always feel like we have a team of cheerleaders behind us at Scottish Rite!” says Monica.

Ellis performed a medial patellofemoral ligament (MPFL) reconstruction on Kate’s right knee first. With the recurrent dislocations of the kneecap, this ligament had been overstretched and was not doing its job. This procedure replaces the ligament and often addresses other damage on the bones that are caused by the kneecap moving in and out of its groove on the thigh bone. Surgery and postoperative physical therapy on Kate’s right knee were a success. Seven months after her first surgery, Kate told her team she was ready for surgery on her left knee. Ben Johnson, P.A.-C., assists Ellis in surgeries like Kate’s. He says, “sometimes other procedures are performed at the same time that change the recovery time, Kate was back to activities sooner with her second surgery.”

Physical therapy after an MPFL reconstruction is focused on proper knee movement and stability during functional activity. Physical therapist Krista Settle, P.T., D.P.T., has worked with Kate throughout her care at Scottish Rite. Krista says athletes like Kate who are driven to succeed and commit to their treatment plan have outstanding outcomes. “Gymnastics is an incredibly demanding sport that pushes young bodies to the limits,” says Krista. “Helping Kate transition to other activities that bring her so much joy is rewarding for me too.”

Now, as she winds down her rehabilitation three months after her last surgery, Kate says that her legs are stronger than they’ve ever been. She also says she has learned a lot about herself through this whole experience. “There’s always something good that comes out of everything,” says Kate. “If I hadn’t had to quit gymnastics because of my knees, I never would have started doing musical theater, and that is what really makes me happy.” Kate looks forward to being cleared to cheer and dance with no restrictions on her movements. “I can’t even tell you how life-changing this procedure is, and now we can see the light at the end of the tunnel,” says Monica. “Most kids her age haven’t had to go through stuff like what she’s had to go through, and she’s done it with such grace and such courage, and I’m really proud of her.”

We enjoy hearing about our current and former patients success stories. Tell us about your MVP.